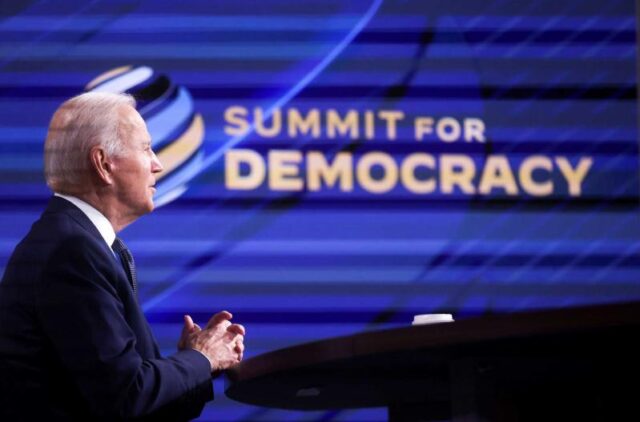 Democracy doesn’t happen by accident.
We have to defend it, fight for it, strengthen it, renew it.
–   PRESIDENT JOE BIDEN.

Democracy and human rights are under threat around the world. Democracies whether in transition or established for decades are confronting serious challenges from within and outside of their borders. Public distrust and the failure of governments to deliver equitable and sustainable economic and political progress has fueled political polarization and the rise of leaders who are undermining democratic norms and institutions. So, there is a need for better cooperation and coordination among the countries to establish peace and stability in the world.

On December 9-10, 2021, President Joe Biden held the first of two Summits for Democracy, which brought together leaders from government, civil society, and the private sector in our shared effort to set forth an affirmative agenda for democratic renewal and to tackle the greatest threats faced by democracies today through collective action. For the United States, the summit offered an opportunity to listen, learn, and engage with a diverse range of actors whose support and commitment is critical for global democratic renewal. It was also a way to showcase one of democracy’s unique strengths which is the ability to acknowledge its imperfections and confront them openly and transparently.

This has become a platform that brings together the world’s democracies to reaffirm their faith in that form of governance, acknowledge shortcomings, and learn from each other is welcome. The United States invited many major countries but left out many too including Bangladesh and Sri Lanka from South Asia whereas countries like Pakistan got the invitation which showcase that it will always be the US blind spot. Singapore was also left out from the summit which raised a few concerns.