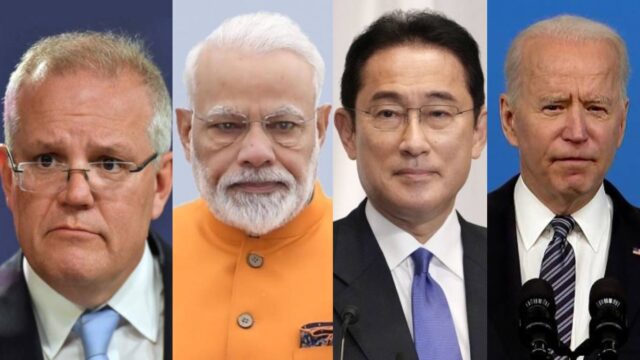 Quadrilateral Security Dialogue or QUAD is a strategic dialogue for discussing diplomatic ties between the United States, India, Japan and Australia. QUAD for the year 2022 was held on 3rd March 2022 through an online webinar that was chaired by the Prime Minister of India, Mr Narendra Modi, Prime Minister of Australia, Mr Scott Morrison, Prime Minister of Japan, Mr Fumio Kishida and the President of United States, Mr Joe Biden. The highlights of the meeting include Mr Modi calling for concrete and practical forms of cooperation within the Quad by providing humanitarian and disaster relief to Ukraine in the ongoing Russia-Ukraine conflict. Mr Modi also talked about debt sustainability, supply chains, clean energy, connectivity and capacity building with respect to the sensitive situation in Ukraine.

Quad, initiated in 2007, has been generally described as a non-military gathering of the four countries with its major focus being the Indo-Pacific issues and diplomatic relations between the countries. In its 2022 session, QUAD saw the emergence of concerns related to the Russia-Ukraine conflict. After the web-meet, United States’ department acknowledged that “India has expressed its deep concern over the situation in Ukraine and has reiterated its call for immediate cessation of violence and an end to hostiles.” Referring to the Russia-Ukraine conflict, the Japanese Prime Minister Fumio Kishida said, “We’ve agreed that unilateral changes to the status quo with force like this should not be allowed in the Indo-Pacific region.”

However, Prime Minister Modi put an emphasis on the need to return to a path of dialogue and diplomacy in dealing with Ukraine. He further reiterated that it is very important that every nation must adhere to the UN Charter, international law and respect so that sovereignty and territorial integrity remains intact.

The four respective Leaders also discussed other issues related to the situation in South-East Asia, the Indian Ocean and the Pacific Islands. Later, President Joe Biden tweeted that the meeting with the Quad leaders covered “our commitment to sovereignty and territorial integrity around the world, including in the Indo-Pacific.”