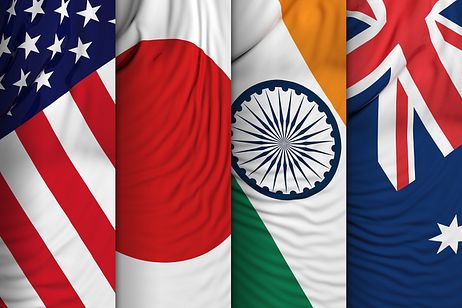 During the 2017 ASEAN Summit in Manila, all the four members of Quad led by Prime Minister Shinzo Abe, Prime Minister Narendra Modi, Malcolm Turnbull, and President Donald Trump re-established the bases of the forum to especially counter China both militarily and economically in the South China Sea.

The Quad countries conducted their next edition of the Malabar naval exercises off the coast of Guam from 26th to 29th of August 2021. This is the second edition of the Malabar exercise in a row to include Australia. Given the changing relationship between China and the Quad countries, the working of the group will intensify. Although initially, India was reluctant about this exercise over the period has been, enthusiastic about the Quad. As per the reports, this exercise aims to provide an opportunity for common-minded navies to enhance inter-operability, gain from best practices and develop a common understanding of procedures for maritime security operations.

The Malabar naval exercise began in 1992 between Indian and United States navies in the Indian Ocean. In 2015, Japan became a permanent member of the exercise. The Malabar exercise held in 2020 had been conducted in two phases both in the Bay of Bengal and the Arabian Sea. These included Australia as well.

Indian frigate INS Shivalik and corvette INS Kadmatt took part in the Malabar exercise. They both are the example of recently built and designed indigenous multi-role Guided Missile Stealth Frigate and Anti-Submarine Corvette and are a part of India’s Eastern Fleet based in Visakhapatnam, in southern India, under the Eastern Naval Command.  As per the reports by the U.S. Navy had sent three warships including destroyers, P-8 maritime reconnaissance aircraft, anti-submarine warfare (ASW) helicopters, and special forces whereas the Japanese Navy sent three surface combatants, a submarine mine-layer, maritime reconnaissance aircraft, ASW helicopters, and special forces. The Australian Navy sent one ship, an ASW helicopter, and Special Forces.

China has always been concerned with this exercise and the ever-growing role of the working mechanism of the Quad.  China announced ‘new rules’ about the passage of foreign ships in its ‘territorial waters’ effective from the 1st of September 2021 after this exercise took place. China will continue to put security threats in place while Quad will continue to challenge such claims. Although there are still a few steps to be taken yet it can be said that the member countries have been taking the necessary step to enhance the cooperation and coordination to answer the security threats and safeguard the strategic interest in the region.