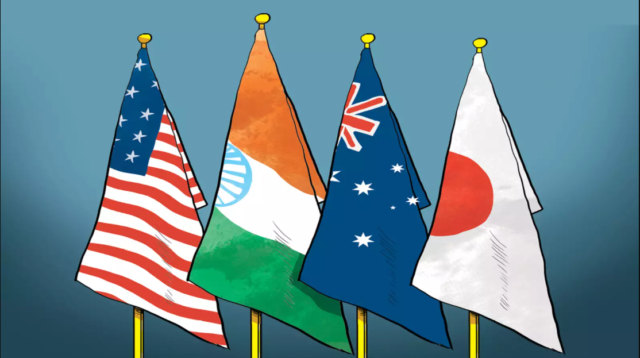 During the 2017 ASEAN Summit in Manila, all the four members of Quad led by Prime Minister Shinzo Abe, Prime Minister Narendra Modi, Malcolm Turnbull and President Donald Trump re-established the bases of the forum to especially counter china both militarily and economically in the South China Sea.

The term was first used by an Indian scholar and Historian Kalidas Nag in his book ‘India and the Pacific World’ in 1941. According to him, it was the mixture of cultures and civilizations. But the term gained momentum when Japanese PM Shino during his address in the Indian Parliament on ‘Confluence of the two Seas’ and used the term again. Since then different aspects from economic to military have been attached to the term.

The current interest of the Quad has been all around the Chinese military and maritime footprint in Indian and Pacific oceans. This has led to major concern as the aggressiveness and power of China has been ever increasing.

The Quad nations met for the third time in early February 2021, after September 2019 and October 2020. The meeting was held on February 2021. The meeting was attended by India’s External Minister S. Jaishankar, US Secretary of State Antony Blinken, Australia’s Foreign Minister Marine Payne and Japan’s Foreign Minister Toshimitsu Motegi. During the meeting among other aspects like Covid-19 and Climate change, serious discussion were raised about the ‘Free and Open Indo-Pacific’ and concerns about the China’s Coast Guard Law.

On 12th March 2021, the Quad had their first virtual meeting. This was not only the first meeting of US under Biden administration but also it was the first all ‘Quad Leasers Meeting’. The meeting was held to express the need for cooperation among the members to deal with Covid-19 through joint cooperation on Vaccines and also stressed upon ‘open and free’ Indo-Pacific region. This meeting also shared US commitment under the new Biden administration towards the above.

Outcomes of the meeting:

Russia:
Russia is India’s long friend and sees Quad as China centric. India and Japan although to counter this has bought Russia on for a trilateral track-II to work for Joint investment and development for the region. Since Russia is also an important player of Indo-Pacific, it becomes essential to incorporate them otherwise it would negatively affect the working of the Quad.

China has always looked at Quad as a conspiracy theory by US against them. China’s media during the meetings portrayed that no alliance can be advantageous against them and they can’t be replaced by US in terms of trade.

With love from China:
Global Times, Chinese newspaper published an essay on India’s role in Quad. China sees India using Quad as a tool to blackmail and it will be negative for BRICS. The essay argued that India through its involvement in the forum has worsened its relations with China and Russia. Also, that all of this has affected the growth and development of BRICS and SCO.

As the military confrontation and territorial disputes are increasing, US is also helping to bring peace and better cooperation in the region.

As the military and economic power of China is increasing, so is the desire for others countries to be part of the forum. During the talks, it was mentioned that European countries are to be included to build up a strong front for the security of the Indo-Pacific region. While China is the main issue of the Quad driving the group towards a common viewpoint and strategy but it is not the only issue.

With the leader’s meeting, we can witness the Quad direction taking a different way. China is not only the priority but it’s the sectors and areas like technology, climate change and Covid-19. Quad now has a proper structure and framework to work on with much more commitment from the four countries.