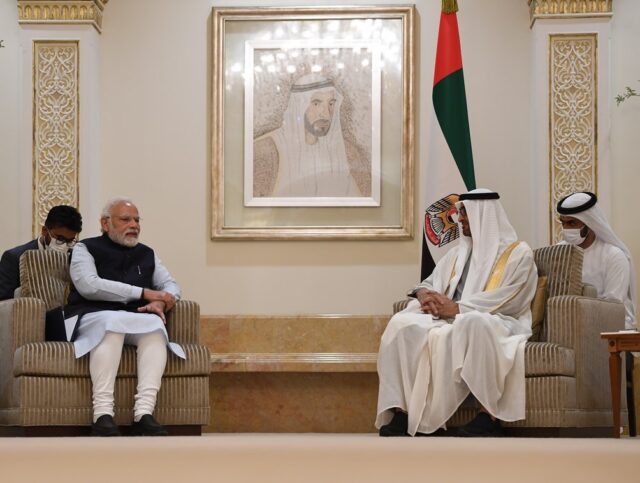 Prime Minister of India, Shri Narendra Modi visited Germany at the invitation of the German Chancellor, H.E. Mr. Olaf Scholz, for the G7 Summit under the German Presidency. On his way back to India, he made a brief stopover in Abu Dhabi, UAE for a meeting with His Highness Sheikh Mohamed bin Zayed Al Nahyan, President of the UAE and Ruler of Abu Dhabi on the 28th of June 2022.

On arriving in the Emirates, Prime Minister Modi called on the President of the UAE and Ruler of Abu Dhabi His Highness Sheikh Mohamed bin Zayed Al Nahyan. This was their first in-person meeting since August 2019 when Prime Minister visited Abu Dhabi last.

Prime Minister also congratulated Sheikh Mohamed bin Zayed Al Nahyan on his election as the third President of the UAE and the Ruler of Abu Dhabi. This meeting was also significant from the bilateral point of view as both leaders discussed various aspects of the India-UAE Comprehensive Strategic Partnership which has been carefully fostered over the past few years.

During the Virtual Summit held between India and the UAE on the 18th of February, both countries signed the Comprehensive Economic Partnership Agreement, which came into effect on the 1st of May. The CEPA is predicted to boost trade and investment even further between partner countries. Bilateral trade between India and UAE for the Financial Year 2021-22 was about USD 72 billion. At the same Summit, both leaders released a Vision Statement. This Vision Statement has laid the guidelines for stronger bilateral cooperation in the coming years in a variety of areas which include trade, investment, renewable energy, food security, health, defence, education, skills and culture and people-to-people connections.

Both leaders expressed contentment that India and the UAE continue to build closer partnerships in these arenas building on their close and friendly ties and historical people-to-people connections. India and the UAE share a very strong energy partnership which is now gaining a new focus on renewable energy.