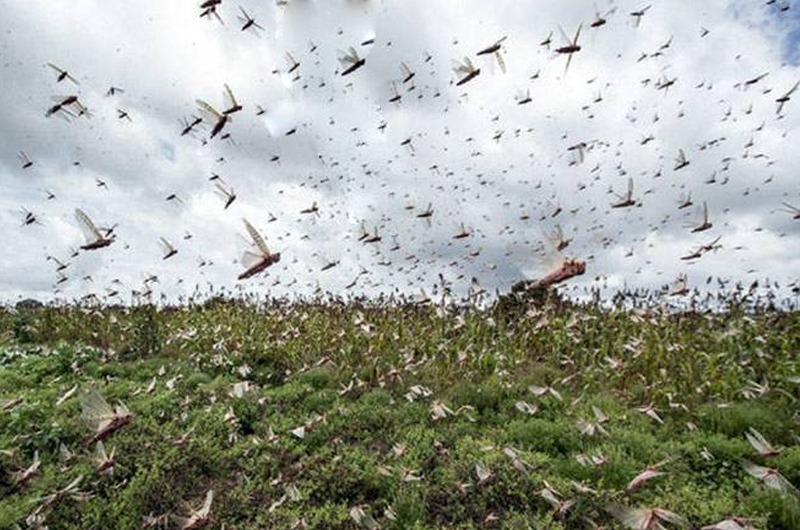 When the world is confronted by challenges of COVID 19, large swarms of desert locusts have entered parts of India. Locust worms are generally found in semi-arid regions of the world  and they inhabit an area of about six million square miles which include thirty countries during their period of dormancy. Heavy rains and cyclones in the Indian Ocean are being cited by experts as reasons for increased breeding of locusts this year. It is considered the most destructive migratory pest in the world and in the course of infestation, large swarms plunge on a region covering and spreading across a fifth of Earth’s land surface. A single swarm covering one square kilometre can contain up to 80 million locusts. They are grasshopper-like insects, and can multiply and grow three fold in three months.  They are endangered to food security wherever they spread.

This swarm originated in the eastern part of Africa. Kenya, Sudan, Somalia, Ethiopia  and Djibouti have been the worst affected countries on the continent.  The Locusts have reached India and Pakistan via Suadi Arabia and Iran. These swarms have entered in several states of India including Rajasthan, Gujarat, Madhya Pradesh, Chhattisgarh, Uttar Pradesh, Andhra Pradesh, Tamil Nadu, Maharashtra, and now heading towards Jharkhand. The states  are gripped with these worms which feed on the food that are grown for humans, causing damage to the crops further resulting in famine and starvation.  Hence, it also acts as a  threat to India’s food security at a time when the country is vulnerable to hunger due to COVID-19 pandemic. With about 50,000 hectares of cropland destroyed by locusts, we can also say that India is facing its worst food shortages since 1993.

In India farmers are already suffering under the economic impact of COVID-19. The massive locust attack has only worsened their condition. The Ministry of Agriculture and Farmers Welfare informed that locust control operations have been stepped up in affected states to combat the menace. In total “89 fire brigades for pesticide spray; 120 survey vehicles; 47 control vehicles with spray equipment and 810 tractor-mounted sprayers have been deployed for effective locust control, as per requirement during different days,” the ministry said. For prevention the farmers are advised to spray the crops with a solution made up of neem seeds extract mixing with water. The Indian authorities have sent out drones and tractors to track desert locusts and spray them with insecticides. This is the worst locust invasion seen by the country in the last thirty years.

The only good thing about this worm is that they do not attack people or animals and there is no evidence that suggests that locusts carry diseases that could harm humans. In many countries, people collect locusts using large nets. Many people stir-fry, roast or boil it for eating as they are rich in protein.  In spite of these limited benefits , the need of the hour is to control the invasion of locusts. However, if not controlled the invasion will only compound the economic crisis that the country has been plunged into following the outbreak of the COVID-19 pandemic.