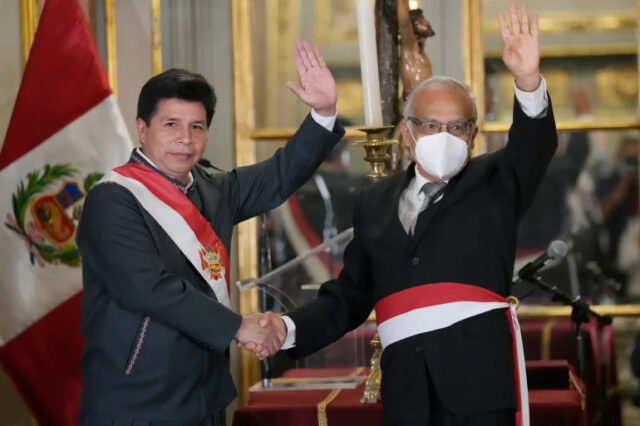 On 9th February 2022, Peruvian President Pedro Castillo has sworn in the fourth cabinet in the last six months when he took over the presidentship. President Castillo only took over the position on July 28, 2021, and has been suffering ever since to bring stability to the system. The President has taken down the Prime Minister as well who lasted in the office for just three days. Continued internal struggles that have brought instability in the government that has also defined the left-wing leader’s first months as president is among the reasons for the latest reshuffle. Over the last choice of cabinet, the President has been criticized and this also serves as another reason for the change of the cabinet. Héctor Valer who was the ex-prime minister has been dismissed from the cabinets due to the previous record of domestic violence that has been registered against him. President Castillo named Aníbal Torres, his former justice minister, as the new Prime Minister to replace Valer.

Peru’s rich and varied heritage includes the ancient Incan capital of Cuzco and the lost city of Machu Picchu. The country has been going through two decades of conflict from 1980 to 2000, between the state and leftist guerrilla groups, the Tupac Amaru Revolutionary Movement and the Shining Path, which still has a following.

Further, President Castillo also named Hernan Condori who is a doctor with experience in the Amazon Indigenous territories, as his health minister amid a surge in cases of the Omicron coronavirus variant. He also named nuclear physicist Modesto Montoya environment minister amid an ongoing disaster in Peru’s capital following the mid-January spill of 11,900 barrels of oil into the Pacific Ocean. The finance minister Oscar Graham and foreign minister Cesar Landa who were elected for their respective position have remained unchanged from their posts.