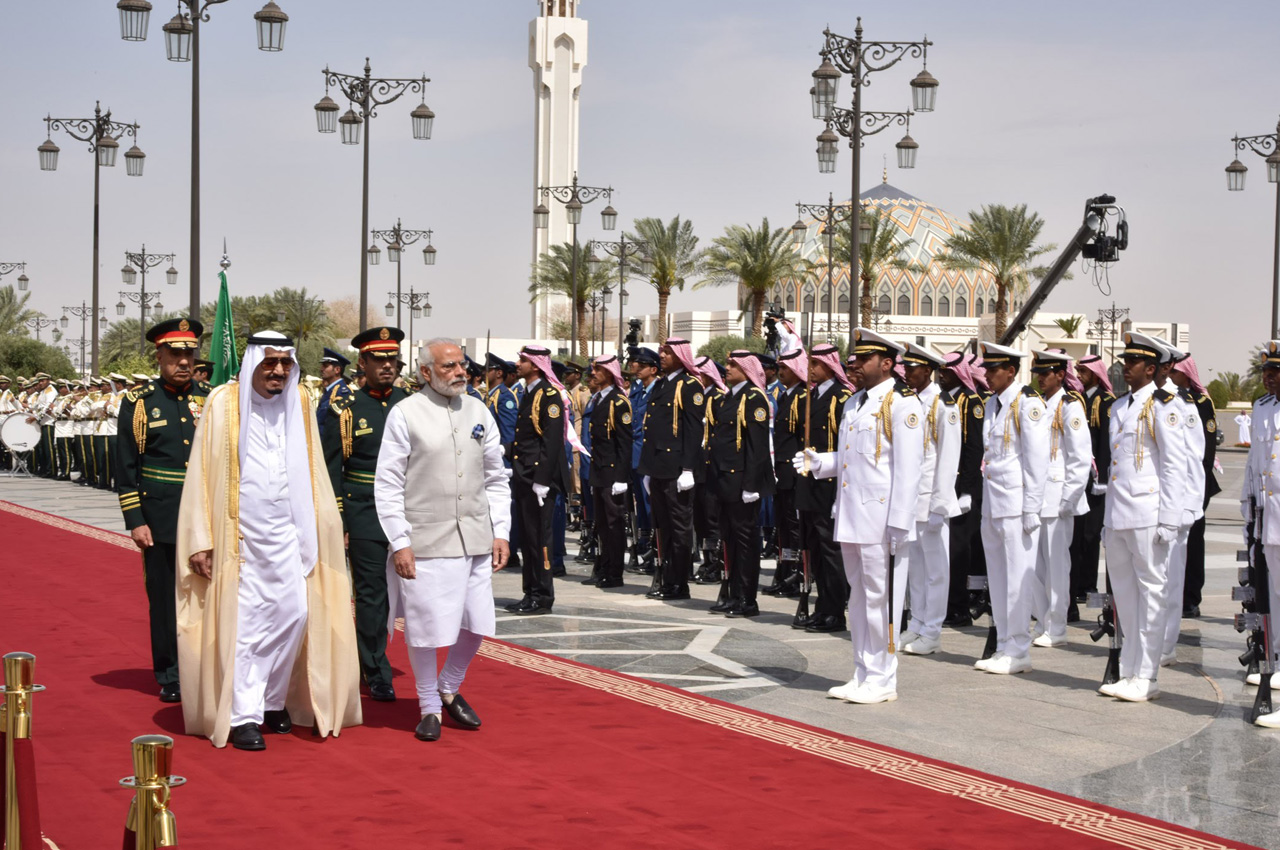 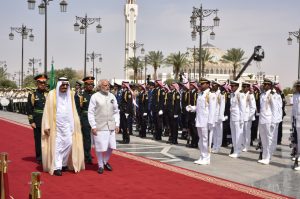 At the invitation of the Custodian of the Two Holy Mosques His Majesty King Salman bin Abdulaziz Al Saud, Prime Minister of the Republic of India, Narendra Modi paid a two-day official visit to the Kingdom of Saudi Arabia from April 2-3, 2016.

The Custodian of the Two Holy Mosques King Salman bin Abdulaziz and Prime Minister Modi exchanged views on bilateral, regional and multilateral issues of mutual interest. The two leaders underlined the close and friendly bilateral ties, deep-rooted in shared history and sustained and nourished through growing economic partnership, multi-faceted cooperation and vibrant people to people contacts. The wide-ranging and constructive discussions were held in a cordial atmosphere and enabled better understanding and appreciation of each other’s concerns and perspectives, recognizing the close interlinkage of the stability and security of the Gulf region and the Indian subcontinent and the need for maintaining a secure and peaceful environment for the development of the countries of the region.

Both leaders expressed appreciation for the successful transformation of bilateral relationship in political, economic, security, defence, manpower and people to people exchanges, in recent years, which have enriched bilateral ties. They expressed satisfaction at the regular exchange of high-level visits between the two countries, underlining that the Delhi Declaration (2006) and the Riyadh Declaration (2010) elevated the mutually beneficial bilateral relations to the level of ‘Strategic Partnership’.

Cognizant of their responsibility for promoting peace, stability and security in the region and the world, the two leaders emphasized the importance of further cementing bilateral strategic engagement, including in the areas of security and defence cooperation, to serve the common interests of the two countries and their peoples.

Prime Minister Modi acknowledged that the MoU on Defence Cooperation signed during the visit of His Majesty King Salman bin Abdulaziz Al Saud to India in February 2014 as the then Crown Prince, Deputy Premier and Defence Minister of the Kingdom of Saudi Arabia was an important milestone in strengthening the strategic partnership between the two countries. The two leaders agreed upon the need to intensify bilateral defence cooperation, through exchange of visits by military personnel and experts, conduct of joint military exercises, exchange of visits of ships and aircrafts and supply of arms and ammunition and their joint development. They also welcomed the decision for convening of the second meeting of Joint Committee on Defence Cooperation in Riyadh to follow up on the visit of Prime Minister Modi.

The two leaders agreed to enhance cooperation to strengthen maritime security in the Gulf and the Indian Ocean regions, vital for the security and prosperity of both countries. They further agreed to promote bilateral collaboration for humanitarian assistance and evacuation in natural disasters and conflict situations.

The two leaders expressed strong condemnation of the phenomenon of terrorism in all its forms and manifestations, irrespective of who the perpetrators were and of their motivations.

Affirming that the menace of extremism and terrorism threatens all nations and societies, the two leaders rejected totally any attempt to link this universal phenomenon to any particular race, religion or culture. They called on all states to reject the use of terrorism against other countries; dismantle terrorism infrastructures where they happen to exist and to cut off any kind of support and financing to the terrorists operating and perpetrating terrorism from their territories against other states; and bring perpetrators of acts of terrorism to justice.

The two leaders agreed to further strengthen cooperation in combating terrorism, both at the bilateral level and within the multilateral system of the UN. The two leaders called upon the international community to strengthen multilateral regimes to effectively address the challenges posed by terrorism. The two sides agreed to work together towards the adoption of India’s proposed Comprehensive Convention on International Terrorism in the United Nations. The Prime Minister lauded Kingdom’s efforts at fighting terrorism in all its aspects and its active participation in international efforts towards this end. The Indian side was briefed on the Kingdom’s initiative in bringing together Islamic Alliance against terrorism.

Both leaders agreed to promote cooperation in cyber security, including prevention of use of cyber space for terrorism, radicalization and for disturbing social harmony. The two leaders directed their relevant agencies to coordinate efforts to counter radicalization and misuse of religion by groups and countries for inciting hatred, perpetrating and justifying terrorism for pursuing political aims. The two leaders welcomed exchanges and dialogue between religious scholars and intellectuals of both countries and the organization of conferences and seminars to promote values of peace, tolerance, inclusiveness and welfare, inherent in all religions.

Reiterating the significance of regular bilateral interactions in reinforcing the momentum for bilateral cooperation, the leaders noted with satisfaction the increase in high-level exchanges between the two countries in recent years. They underlined the importance of regular exchange of visits, including at the levels of ministers and senior officials.

Both leaders appreciated the well-functioning bilateral institutional mechanisms in the field of trade & investment, energy, defence and manpower. They noted that new and potential areas of cooperation identified during the meetings held under these mechanisms had a constructive effect on the expanding bilateral ties and further called for effective implementation of the decisions made under the framework of these mechanisms.

Acknowledging the on-going positive transformation of the economies of India and Saudi Arabia, the two leaders emphasized the importance of expanding trade and investment ties to drive the strategic engagement forward. They directed their Finance and Trade Ministers to work together to find ways and means to substantially increase the flow of bilateral investments and growth of trade ties.

Acknowledging the steady increase in bilateral trade over the last few years, the two leaders expressed satisfaction at the US$39 billion trade in 2014-15. Taking note of the excellent trade and economic engagement, with the two countries being among the top trading partners for each other, the two leaders agreed upon the need to further strengthen these ties, particularly through diversifying non-oil trade. 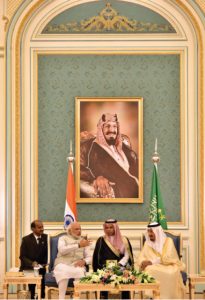 Both leaders expressed satisfaction at the growing presence of Indian and Saudi companies in each other’s market and agreed to further encourage trade promotion measures and participation in fairs and exhibitions. They welcomed the meeting of Saudi India Business Council in New Delhi in December 2015 and agreed that Council was a useful platform for furthering trade and economic cooperation.

The two sides conveyed satisfaction at the holding of the 4th India GCC Industrial Forum at King Abdullah Economic City, Jeddah in November 2015. The Saudi side thanked India for active participation of a large number of Indian companies in the International Fairs and Exhibitions held in Riyadh and Jeddah.

The Custodian of the Two Holy Mosques King Salman Bin Abdulaziz lauded the strong growth shown by Indian economy and expressed appreciation for Prime Minister Modi’s remarkable vision for the future of the country. He commended Prime Minister Modi’s worthy initiatives of “Start Up India”, “Make in India”, “Smart City”, and “Clean India”, noting their strong potential to provide Indian economy a positive thrust for growth.

The Indian side highlighted the key initiatives taken by the Government of India to improve the ease of doing business in the country and India’s key efforts to simplify and rationalize existing rules and relax the foreign direct investment norms in key areas, including railways, defence and insurance. Inviting Saudi Arabia to be a partner in India’s growth story, Prime Minister Modi encouraged Saudi Aramco, SABIC and other Saudi companies to invest in the infrastructure sector in India and to participate in projects creating mega industrial manufacturing corridors, smart cities as well as the Digital India and Start up India programmes.

Both leaders also welcomed the signing of the framework agreement between the General Investment Authority in Saudi Arabia and Invest India aimed at facilitating investments by the private sectors in the two countries.

Keeping in view the importance of energy security as a key pillar of the strategic partnership, the two leaders expressed satisfaction at their growing bilateral trade in the energy sector, acknowledging Saudi Arabia as the largest supplier of crude oil to India.

The two leaders agreed to transform the buyer-seller relationship in the energy-sector to one of deeper partnership focusing on investment and joint ventures in petrochemical complexes, and cooperation in joint exploration in India, Saudi Arabia and in third countries. The two sides also agreed to focus on areas of training and human resources development and cooperation in research and development in the energy sector. In this regard, the two leaders expressed the need for regular meetings under the umbrella of India-Saudi Arabia Ministerial Energy Dialogue.

The two leaders agreed to strengthen cooperation between educational institutions, universities and higher research institutions of the two countries.

Both leaders emphasized the importance of continued promotion of scientific and technological collaboration, including in the areas of renewable energy including solar, Information and Communication technology, space technology, sustainable development, arid agriculture, desert ecology, urban development, healthcare and bio-technology. The two sides further agreed to collaborate on areas of food security.

The Saudi side appreciated the initiative taken by the Prime Minister of India leading to the formation of International Solar Alliance. They acknowledged the importance of this Alliance in advancing new solar technologies worldwide.

Recognizing the vibrant people to people contacts that provided strong bonds between the two countries, the two leaders lauded the valuable role of the Indian community in Saudi Arabia and its contribution to the progress and development of both India and Saudi Arabia. They welcomed the signing of an agreement on labour cooperation for recruitment of General Category Workers. Both sides also welcomed the establishment of a Joint Working Group on Consular issues under the umbrella of the India-Saudi Arabia Joint Commission to discuss consular issues on a regular basis.

Prime Minister Modi conveyed his sincere appreciation for the excellent arrangements made by the Saudi authorities for the comfort of the Haj and Umrah pilgrims from India.

The two leaders noted that India and Saudi Arabia have shared civilizational ties over history that are enriched by the movement of goods, peoples and ideas. They believed that this common heritage can be drawn upon to strengthen their convergence on approaching contemporary challenges. A broad approach of humanism and tolerance and a conviction that faith should unite rather than divide can be a positive factor in international relations.

The two leaders discussed regional and international issues of mutual interest, including the security situation in West Asia, Middle East and South Asia, in the light of their common interest in the regional and global peace, security and stability. Referring to the earlier declarations with regard to the situations in Yemen and Syria, they called for the implementation of relevant UN Security Council resolutions (2216, 2254 and 2268). They also expressed grave concern regarding security situation in Libya and Iraq. In this regard, they reiterated the importance of peaceful resolution of these issues through dialogue and political negotiations.

During their discussions on regional issues, the two sides emphasized the importance of the principle of good neighbourliness, non-interference in internal affairs, respect of independence, sovereignty and territorial integrity and resolution of dispute through peaceful means.

The two sides expressed their hope for achieving a just, comprehensive and lasting peace in accordance with the Arab Peace Initiative and the resolutions of international legitimacy, in a way that guarantees the legitimate rights of the Palestinian people, including the establishment of their independent, united and viable state, with East Jerusalem as its capital.

Both leaders emphasized the importance of an effective multilateral system, centred on a UN reflective of contemporary realities, as a key factor in tackling global challenges. They stressed upon the urgent need to pursue UN reforms, including of the Security Council through an expansion in both categories of its membership, to make it more representative, credible and effective.