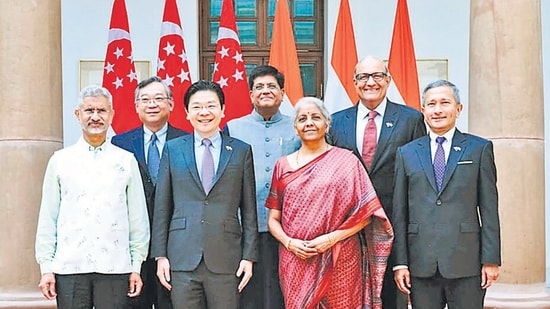 The faithful relationship between India and Singapore is established on the basis of strong commercial, cultural, and people-to-people connections and a history that dates back to a millennium. After independence, India was one of the first countries to recognize Singapore in 1965. In 2005, the Comprehensive Economic Cooperation Agreement (CECA) was signed between India and Singapore. This agreement paved the way to hoisting this relationship to a level of strategic partnership in 2015, which was initiated on the occasion of the 50th anniversary of the bilateral ties between the two nations. Shared economic opportunities, values and approaches, and consolidation of interest in key issues manifest the substructure of the India-Singapore relationship. On a political and strategic front, both countries engage regularly, with economic and technological ties growing substantially. There are a variety of issues in the international arena in which India and Singapore converge, and both countries are part of numerous groupings, including the G20, IORA (Indian Ocean Rim Association), Commonwealth, IONS (Indian Ocean Naval Symposium), and East Asian Summit.

Recently, on September 17th, 2022, an inaugural India-Singapore Ministerial Round Table (ISMR) was held in New Delhi. From the Singaporean side, the maiden session was initiated by the Deputy Prime Minister (PM) and Finance Minister Lawrence Wong; Foreign Minister Vivian Balakrishnan; Trade Minister Gan Kim Young; and Transport Minister S Iswaran. From the Indian side, the delegations were represented by Finance Minister Nirmala Sitharaman; External Affairs Minister S. Jaishankar; and Commerce Minister Piyush Goyal. It is an advanced principle seeking to deepen the existing collaboration and recognize opportunities for mutually beneficial cooperation in emerging and futuristic areas.

Prime Minister Narendra Modi envisioned the ISMR, which is a pioneering dynamism that is a testimony to the distinctive India-Singapore bilateral ties. According to Deputy PM Wong, this platform can further enhance the regular engagement between the two nations. Moreover, it can pave the way for collaboration in new areas of advanced partnership soon. During the roundtable meeting, both nations acknowledged various collaborative areas, including, food, energy security, green technology, specifically green hydrogen, skill development, and digital connectivity. The shared interests of both countries in various fields provide opportunities for greater collaboration between the two. For instance, Singapore is the leader in the fintech domain and sees India as a potential partner as India’s urge to move towards digitalization and its proliferating growth in the start-up space are ameliorating. According to Mr. Wong, these areas of collaboration will not only serve the two countries but will serve as catalysts and pathfinders for greater cooperation in plurilateral or multilateral platforms.

In an interview after the visit, Mr. Wong recapitulates how Singapore portrays India as a strategic partner and as one of the major players in the role of the ever-evolving regional Asian-cooperation infrastructure. Mr. Wong further praised India for intensifying its cooperation with various countries, specifically with the east, thus nurturing the “Act East” Policy initiated by PM Modi.