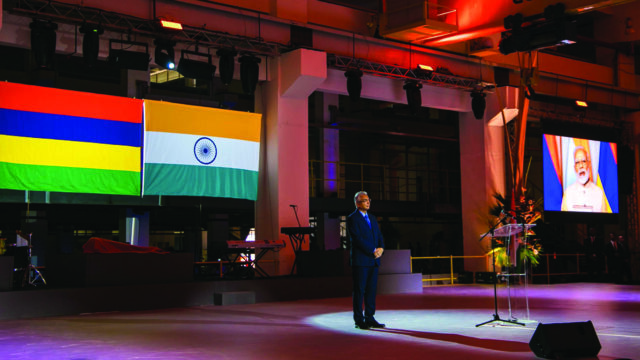 Mauritius, often referred to as the “star and key of Indian Ocean”, shares a special relationship with India. India and Mauritius are connected by shared history and civilizational heritage. Around 68 per cent of Mauritians are of Indian descent. Some can trace back their ancestry to the first batch of Indian indentured labourers that reached the shores of Mauritius on 2 November 1834 during the British colonial rule. The relations between the two countries have been close.  In recent years, the relationship has advanced to a strategic partnership. The two-way high-level visits have enhanced the relationship further. Prime Minister Narendra Modi and President Ramnath Kovind visited Mauritius in 2015 and 2018, respectively. Similarly, India had an opportunity to host several high-level dignitaries from Mauritius. Prime Minister Pravind Kumar Jagnauth visited India in January 2019 as the Chief Guest at the 15th Pravasi Bharatiya Divas (PBD) Convention held in Varanasi and as a Guest of Honour at the official Republic Day celebrations in Mumbai. Over the years, the two countries have expanded cooperation in several areas, including economic and security.

India’s economic cooperation with Mauritius is quite robust. This is visible through the fact that India is the largest trading partner of Mauritius since 2007. In 2018-19 the two-way trade between the two countries stood at $1.2 billion. India’s exports to Mauritius largely comprise petroleum products. Other items include electric machinery, vehicles, pharmaceuticals, cereals, cotton, apparel, and clothing accessories. On the other hand, its key imports are optical, photographic, medical, scientific, and precision instruments, aluminum and steel. In terms of investments, Mauritius is a leading source of Foreign Direct Investment (FDI) in India.  It accounted for around 32 per cent of total inflows in the country in 2019.   In order to boost economic cooperation, the two countries have been negotiating a Comprehensive Economic Cooperation and Partnership Agreement (CECPA). This agreement will be mutually beneficial for the trade of goods and services.

In 2016, India signed an agreement to provide a Special Economic Package (SEP) of $ 353 million for the development of five new projects. They involve the development of a Metro Express, Supreme Court building, an ENT hospital, housing, and supply of digital tablets to primary school children in the country. Prime Minister Modi along with Prime Minister Jagnauth of Mauritius jointly inaugurated the Supreme Court building in Port Louis through a video conference on 30 July 2020.  India has also completed the Metro and ENT hospital, while the housing project is still underway. However, in 2019 Mauritius ended a decade-long relationship with Mangalore Refinery and Petrochemical Limited (MRPL) by not renewing the contract to supply petroleum products. This suggests that India should not be complacent in its relations with Mauritius and continue its efforts in building the partnership further.

Apart from economic cooperation, India has close cooperation with Mauritius in the defence and security field. With India’s support, Mauritius has been able to augment the skills of its security forces, restructure and enhance the capacity of its National Coast Guard, and develop a maritime air squadron. India has also transferred naval vessels to Mauritius by extending concessional lines of credit.  During President Ramnath Kovind’s visit to Port Louis in 2018, India announced a new Line of Credit of USD 100 million for defence procurement for Mauritius. It offered a Multi-Purpose Offshore Patrol Vessel (MPOPV) to boost its security. More importantly, as per an agreement signed in 1974 Indian Naval and Coast guard officers are seconded to the Mauritian National Coast Guard.

While this close cooperation is primarily guided by the historical and cultural affinity, in recent years India has emphasized the strategic importance of Mauritius. During his first visit to Mauritius in 2015, Prime Minister Modi highlighted that “Mauritius is a key leader for a secure and sustainable future for the Indian Ocean. We in India are proud to be your partner.” It is in Mauritius that Prime Minister Modi articulated his vision for the region, SAGAR (Security and Growth for All). He did so on the commissioning of the Indian built Offshore Patrol Vessel (OPV) Barracuda in the service of the National Coast Guard of Mauritius. According to this vision, India will work towards a safe, secure, and stable Indian Ocean region. It called for deepening economic and security cooperation with its maritime neighbours. This would imply greater maritime cooperation through exchange of information, coastal surveillance and building of infrastructure.

Through SAGAR, India has also prioritised the blue economy. It emphasizes the important role of a country’s Navy and Coast Guard in securing the EEZs and thereby enabling the economic activities based on the blue economy. In Mauritius too, the blue economy has been identified as an important pillar of its economic development. The diverse activities related to blue economies such as fisheries, marine-based tourism, ocean-based mineral resources, shipping, and ports development will call for a more efficient role of the coast guard in Indian Ocean region including Mauritius.

The COVID-19 pandemic has enhanced the cooperation further. Earlier this year, the Indian Navy deployed the Indian Naval Ship (INS) Kesari to Mauritius. This was part of the Navy’s “Mission Sagar” to assist Indian Ocean island states during the pandemic. This deployment is in line with India being the ‘first responder’ to any natural disasters in the Indian Ocean region.  However, this was the first time that the Indian navy was deployed during a pandemic. Under this mission, the Indian Navy delivered food items, COVID-relevant medicines, special Ayurvedic medicines, and also provided medical assistance teams to support the ongoing national efforts in Mauritius.

India and Mauritius share a mutually beneficial partnership grounded in time tested cultural bond, as well as strategic considerations. In recent years Mauritius has emerged as a gateway to the African continent. The island is one of the topmost destinations in Africa in terms of ease of doing business. Mauritius appears to be a preferred location to attract investment funds and to route them into Africa. Of late, India has taken steps towards enhancing its engagement with Africa and Mauritius can indeed play a distinct role. The Indian government must recognize Mauritius as a gateway to the Indian Ocean region and mainland Africa. However, there is no doubt that Mauritius will remain important in India’s foreign policy and security matrix in the coming years.

Russia and Its Relations with OPEC As A Non-Member State