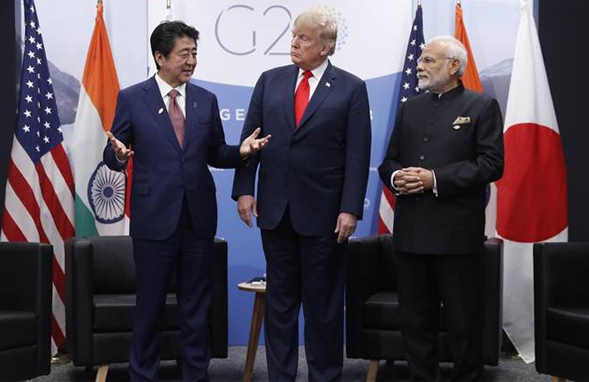 In a first, Japan, USA and India have agreed to cooperate to make the Indo-Pacific a region of peace and prosperity.

Tweeting and calling the meet “historic”, the Prime Minister of India Narendra Modi met withUS President Donald Trump and Japanese Prime Minister Shinzo Abe for a trilateral meet on the status of the Indo-Pacific region. All three powers, of which India and Japan share the region with Indo-Pacific and China, stressed on the need for a “free, open, inclusive and rules-based” order is essential for peace and prosperity in the Indo-Pacific. The trilateral meeting between India, the US and Japan comes at a time when China is engaged in territorial disputes in the Indo-Pacific, including with Japan.

Asserting that they will “continue to work together on shared values,” he said, “When you look at the acronym of our three countries — Japan, America, and India — it is ‘JAI’, which stands for success in Hindi… JAI… trilateral marks the coming together of three friendly nations. Today’s historic JAI meeting was a great beginning. PM @AbeShinzo, @POTUS and I held fruitful talks aimed at furthering connectivity, maritime cooperation and a stable Indo-Pacific.”

After the meeting Prime Minister Modi added that  “This is a very good occasion for the three countries — countries which have shared values, democratic values… We will continue to play a big role together for world peace, prosperity and stability.” He released a 5-Point Action Plan to this effect, which included the importance of working jointly in areas such as connectivity, sustainable development, disaster relief, maritime security and free mobility. All three sides stressed on creating a system in the Indo-Pacific that respected the territorial integrity and sovereignty of its nations. This is exactly the same stance of the three countries at the Asia-Pacific Economic Cooperation Summit held in November in Papua New Guinea.

This meeting came at the heels of that between India, Russia and China, which was focused on the reform of multilateral institutions, including the UN and WTO, while underlining the benefits of a multilateral trading system and an open world economy.