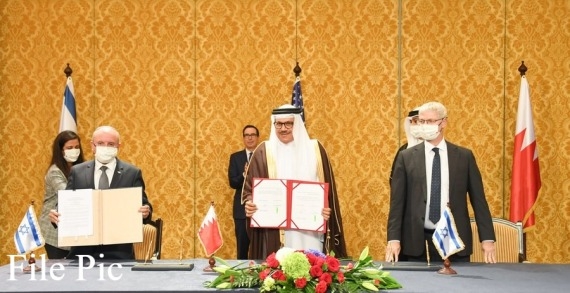 In 2020, Bahrain along with the United Arab Emirates (UAE) signed a “normalization” agreement with Israel. The US-brokered Abraham Accord was partly driven by the countries’ shared concern over Iran.

According to an Israeli Defense Ministry statement, “The MOU (memorandum of understanding) framework will support any future cooperation in the areas of intelligence, mil-to-mil (military to military), industrial collaboration, and more.”

The Ministry quoting the Israeli Defense Minister Benny Gantz said, “Only one year following the signing of the [Abraham] Accords, we have achieved an important defence agreement which will contribute to the security of both countries and the stability of the region.”

The agreement was signed between the defence ministers of the two countries. During Gantz’s visit to Manama, he also met King Hamad bin Isa al-Khalifa at the royal palace.

Bahrain hosts some of the operations of CENTCOM, a US military umbrella organization, and is also the host of the Fifth Fleet’s headquarters. Israel joined CENTCOM in 2021.

Tension in the region has escalated in recent weeks over civil war continuing in Yemen and recent missile attacks targeting UAE. International powers have also failed to reach an agreement over Iran’s nuclear program. Iran has been accused by the US and Israel of staging attacks on cargo ships. Some of these ships targeted had links with Israel.

The UAE has come under missile attacks for the fourth time in the past few weeks. At least three of these attacks have been launched by Houthi rebels in Yemen. In recent weeks fighting has intensified between rebels and the Saudi-backed military coalition. The UAE is part of that coalition.

Israel has confirmed stepping up naval operations in the Red sea.