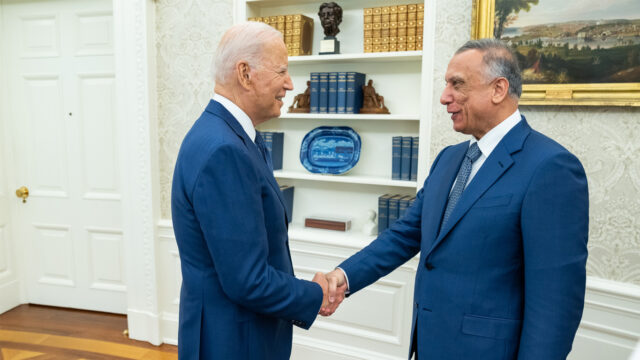 As the world watches chaos unfurl in Afghanistan, it is difficult to think of any thing except wonder the future of the country under the leadership of Taliban. The violent images and the lack of order in Afghanistan has led the spectators to ponder upon the condition of any state that witnesses such a transition. The next in the line is Iraq.

American President Joe Biden resolved to end the combat mission in Iraq led by the United States(US) and spoke about supporting a strong democracy in the country. After witnessing the dire situation in Afghanistan, it is imperative that Iraq takes measures to support a smooth transition. US stated that it will be available to Iraqis for training and other purposes.

Even though there are several efforts being taken by the US, in a report, the Tehran Times quoted an Oxford University Professor explaining the drop in the American influence in the West Asian region. He said that “The US has been chastened by its experiences in Iraq and Afghanistan”. According to him, the regional powers will emerge much stronger in a few years due to the waning effectiveness of American power in the region. US is trying to keep the position strong but there are many interesting aspects unfolding.

Iraq and the Balancing Act

The United States shipped around 50,000 doses of the Covid 19 vaccine to Iraq. This was done under the Global COVAX vaccine sharing programme. America also announced a donation of USD 155 million towards humanitarian assistance in Iraq. This fund is to provide food, healthcare, water and hygiene facilities across the country. The US aims to cooperate with Iraq in the economic sector by advancing energy and agricultural products, climate change through technical assistance, higher education, science and culture. Human rights and elections are also important factors that the US administration plans to promote through technical electoral help.

Despite these measures, it can not be denied that Iraq has been in news for a change in its strategic decisions. On one hand, the Iraqi Prime Minister Mustafa Al-Kadhimi met with the American President to explore the new phase and possibilities in the relationship between the two countries. On the other, Iraq has continued to maintain close ties with China. The Minister for Oil, Ihsan Abdul Jabbar announced last month about the Chinese initiative to build an oil refinery and petrochemical complex worth USD 3 billion. It is expected to help in employment generation under the training and technology transfer of China.  The presence of China in the equation raises eye brows in the international community.

In June 2021, Iraq and China exchanged pleasantries on the occasion of the100th anniversary of the Communist Party of China. The two countries also resolved to work towards “upholding multilateralism, opposing external interference and safeguarding the interest of developing countries”. Political consultations between Iraqi and Chinese Foreign Ministers covered issues of concerns in the world.

There is much insecurity about the future of Iraq especially after witnessing the debacle of Afghanistan. There is a constant fear of the rise of ISIS in Iraq. Iran’s influence on Iraq is another source of concern. US has confirmed its support to avoid such a scenario but with the current chaos in Afghanistan, there is a lot of restlessness.

The US is currently struggling with a violent Afghanistan as Taliban continues to take control of the country. Iraq too has had years of American intervention in the country. A sudden change in the ruling system might be difficult to adapt.

Iraq is even more important now since Afghanistan is being seen as a failure on the part of America.US President Biden has taken several initiatives to improve relations with Iraq. But an increasing closeness between Iraq and China raises many concerns:

* It indicates the increasing importance of China in West Asia which is a crucial region for political as well as economic reasons. The Chinese support to Iran has been irking the American leaders for some time now.

After Afghanistan, Iraq will validate the role that the US plays in the world. US has been seen as the global leader. However, its interventions and then withdrawals have resulted in many complications. The Chinese angle adds to it. China has already extended support to Taliban. Thus it is extremely important to watch the tactics that China adopts with Iraq too and then take necessary steps to avoid another crisis.