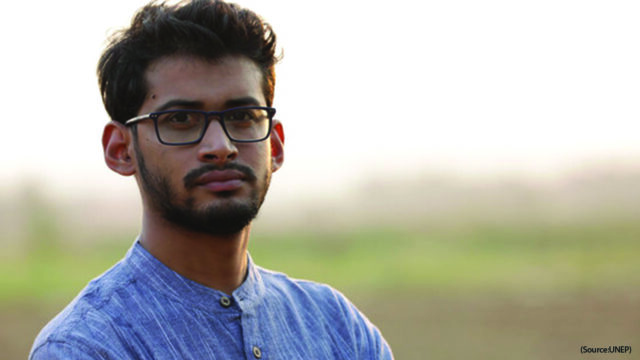 Indian entrepreneur Vidyut Mohan is among seven recipients of the prestigious “Young Champions of the Earth” 2020 prize given by the UN Environment Programme (UNEP). This prize is given to global change-makers under 30 who are using innovative ideas to help solve some of the world’s most pressing environmental challenges. Each recipient will be awarded US$10,000 in seed funding and will receive tailored training to help scale up their ideas.

Vidyut Mohan is the co-founder of “Takachar”, a social enterprise enabling farmers to prevent open burning of their waste farm residues and earn extra income by converting farm residue into value-added chemicals like activated carbon on-site.

Fatemah Alzelzela from Kuwait, Lefteris Arapakis from Greece, Max Hidalgo Quinto from Peru, Niria Alicia Garcia from the United States, Nzambi Matee from Kenya, and Xiaoyuan Ren from China are among others who were awarded this prize.

Young Champions of the Earth is part of UNEP’s #ForNature campaign and aims to celebrate and support individuals aged between 18 and 30 who have outstanding potential to create a positive environmental impact. Seven champions were selected from each global region: Africa, Europe, Latin America and the Caribbean, North America, West Asia and two from Asia and the Pacific by a global jury of experts following a public nomination process.

“Globally, young people are leading the way in calling for meaningful and immediate solutions to the triple planetary crises of climate change, biodiversity loss and pollution – we must listen,”  said UNEP Executive Director Inger Andersen.

Indian entrepreneur Vidyut Mohan founded “Takachar” along with Kevin Kung in 2018. Takachar has developed a portable machine that roasts agricultural waste at high temperatures and converts it into charcoal, fertilizer and activated carbon. This machine does not use energy from outside and runs completely on heat it produces. The machine can consume around 200kg of product per hour and be operated up to 20 hours a day. The machine developed by Takachar costs about third the price of traditional crop conversion equipment. Takachar enables rural farmers to earn 40% more by converting their crop residues into fuels, fertilizers and value-added chemicals like activated carbon. The activated carbon this portable machine generates is sold to companies making water filtration products. This process helps in reducing the air pollution associated with crop residue burning, and by making renewable, biomass-based activated carbon more price-competitive than fossil-based activated carbon.

According to information released by the UN Environment, by 2030, Takachar will impact 300 million farmers affected by this problem, create $4 billion/year equivalent in additional rural income and jobs, and mitigate one gigaton/year of CO2 equivalent.

Vidyut  is a 2019 Echoing Green Fellow and was also featured in 2020 Forbes 30 under 30 list of Social entrepreneurs.