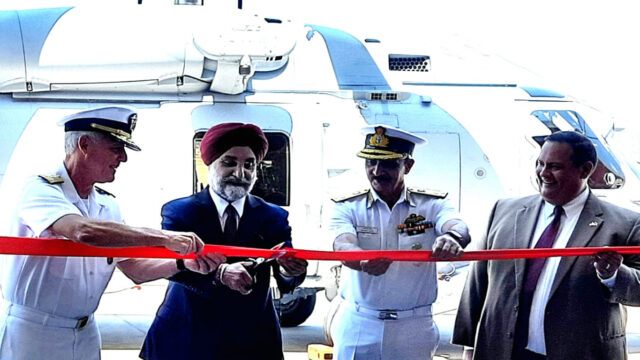 The Indian Navy received the first two of the MH-60R Multi Role Helicopters  from the American Navy. The ceremony was held at the Naval Air Station, North Island, San Diego. It marked the official transfer of these helicopters to the Indian Navy which was accepted by the Indian Ambassador to the USA, H.E. Taranjit Singh Sandhu.

These special helicopters are designed to support multiple missions and have avionics/sensors to survive in dire situations. The helicopters will be further modified to suit the Indian weapons and equipments. These will be a big asset to the Indian Navy. An Indian crew is currently attending training to understand the intricacies of the helicopters in the US.

The maritime security has emerged as an important component of the international politics. The issues like safety, security and co-existence within the international laws of sea have led to several confusions between the countries. India has been an advocate of reaching a cordial decision in terms of maritime differences and has often initiated efforts to achieve cooperation.

The Indian and American Navies have been a part of several exercises in the past. In June 2021, the two navies participated in a Passage Exercise and during the US Navy Carrier Strike Group’s transit through the Indian Ocean. The two day exercise aimed at strengthening the bilateral relationship and cooperation by demonstrating the ability to integrate and coordinate comprehensively in terms of maritime operations.

Indian Navy and the American navy take part in such exercises as a part of the expression of their shared belief in an open, inclusive and rule based international order. These have special relevance in the current scenario in the presence of many disputes existing between the countries striving to mark their territories in the maritime zones. China has been in disputes over its tendencies of expansion in the maritime territory. In order to discourage such behaviour, many countries are opting for joint exercises to display solidarity against any rebellious states. The Chinese presence in the Indian Ocean and its gradual increase is a source of serious concern for many states.

Apart from the intention of checking the Chinese rise, the counter piracy measures and accidental disasters are also challenges for both India as well as the US. India and the US had signed a “ Joint Strategic Vision for the Asia Pacific and Indian Ocean Region” in 2015. India and the US have been trying to work towards increasing the operability in the region for some time. India had US had conducted another Passage Exercise (PASSEX) in July 2020 too. The aim is to be a strong force and create a system that persuades countries from all over the world to follow a set of rules or expect a collaborated response from states with shared understandings. Maritime security is crucial for political as well as economic purposes. Thus, the recent exercise between India and the US is a strong step towards the same.