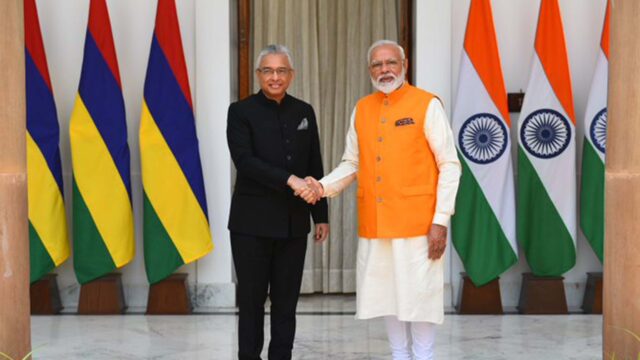 India’s definition of the Indo-Pacific region extends from the East coast of Africa to the West Coast of America’s. The adoption of the expression i.e. “the Indo-Pacific”, indicates the shift of economic might towards Asia. A major chunk of global trade in oil and natural gas traverses through the Indian Ocean region (IOR) especially in the Western Indian Ocean (WIO) and with several chokepoints such as the Strait of Malacca, the Strait of Hormuz, Bab al Mandeb, Mozambique Channel etc, it assumes geostrategic importance. Even though the Western Indian Ocean region is critical for being the source of trade in energy resources, the region is prone to perennial conflict and continues to do so. This region has also attained the reputation of being a hub for piracy especially off the coast of the Horn of Africa. China’s Belt and Road Initiative and the Maritime Silk Route initiatives have resulted in increased Chinese presence in the northern Indian Ocean. Prime Minister Narendra Modi’s vision of Security and Growth for All in the Region (SAGAR) is premised on the economic growth of all the countries in the region. Incidentally, Modi proclaimed India’s vision of SAGAR during his visit to Mauritius in 2015 and emphasizes on the blue economy, peace, prosperity, increased maritime cooperation, rules-based order with adherence to international maritime law and sensitivity to each other’s concerns.

India and Mauritius share deep historical and cultural links with the majority of the Mauritian diaspora being of Indian heritage. Hence, both the countries form natural partners of each other and the engagement in the maritime domain has attained new significance in the broader ambit of India’s great power ambitions and as a strategic competitor to China. The Indian and Mauritian relationship extends across both bilateral and multilateral forums. Mauritius apart from having a strong bilateral relationship is a member of the Indian Ocean Rim Association (IORA) and the Indian Ocean Naval Symposium (IONS). The IORA, established in 1997 has its coordinating secretariat located in Ebene, Mauritius.

With India’s focus on regional diplomacy extending beyond the traditional South Asian Association for Regional Cooperation (SAARC), to other multilateral forums in the extended neighbourhood and the new emerging challenges in the IOR, the Indo-Mauritius relationship has assumed strategic importance. In fact, India’s engagement with the countries littoral to the WIO has significantly increased over the last few years as indicated by Modi’s state visits to these nations. While Modi’s foreign policy doctrine emphasizes strengthening relations between the two countries, it, however, is a continuation of past policies. Prime Minister Navinchandra Ramgoolam of Mauritius in 2005, on a state visit to India, indicated a new emergent dimension of the partnership with India in terms of defence and security.

With its own interests in stake in the WIO, India has been seeking maritime cooperation with its littoral states in Africa. As a part of this changing paradigm, India has tried to build forth friendly relationships with these countries through capacity building, training assistance and military aid.  As declared in India’s maritime strategy document of 2015, Delhi has adopted a diversified approach towards safeguarding its own security interests as well as acting as a net security provider in the larger IOR. As a part of this India’s engagement with countries in the WIO, has resulted in regular visits by the Indian Navy, naval training, transferring naval hardware, joint patrolling of the seas as well as naval exercises, logistic agreements, consolidating and building either navy or a coast guard for countries in the region as deemed appropriate and finally Humanitarian and Disaster Relief (HADR) programmes.

At a tactical level of engagement, ever since 2003, the Indian Navy has been assisting Mauritius in patrolling in its vast exclusive economic zone (EEZ). The joint patrolling is led by the ships of the Indian Navy and is conducted bi-annually in order to prevent maritime piracy, illegal fishing etc. As countries like Mauritius, Kenya, Tanzania, Mozambique, Seychelles etc in the WIO have limited resources in terms of hydrographic capabilities, India has been providing them with assistance in the same. Indian survey ships have conducted hydrographic surveys with Mauritius in line with the MoU signed with the island nation. With trade interests in mind that pass through the Gulf of Aden with a net value estimated to be around $110 billion, India has partnered with Mauritius in order to establish a monitoring station and develop infrastructure on the Agalega Island. The Agalega Island forms the northernmost territory of Mauritius and lies 1000 kilometres away from the main island. The proximity of this island along with the Assumption Island of Seychelles to the important shipping lanes carrying energy resources makes them strategically important. With the absence of large naval capabilities and capacities, these installations and the presence of Indian Navy in the region has provided credible traditional security to any imminent threats to the island states in the WIO.

The Indian Navy’s apart from patrolling the Mauritian EEZ has also deputed a naval officer to lend expertise in managing the National Coast Guard of Mauritius. Indian assistance to Mauritius in terms of naval assets dates back to 1974 when INS Amar, a seaward defence boat was gifted by Prime Minister Indira Gandhi’s administration. Over the years Indian defence assistance to Mauritius includes an interceptor patrol boat for reconnaissance, Dornier Do-228’s as maritime surveillance aircraft, island aircraft engines, Dhruv helicopter and an offshore patrol vessel named MCGS Barracuda, made in India by the Garden Reach Shipbuilders and Engineers, Kolkata. With the delivery of the Indian made MCGS Valiant, a Sarojini Naidu class water jet fast patrol vessel in August 2017, India has so far provided three patrol vessels to Mauritius. Additionally, India has provided assistance to Mauritius in installing a Coastal Surveillance Radar besides an Automatic Identification System. India has also extended two different lines of credit for Mauritius worth $500 million and $100 million for taking up priority projects related to infrastructure and to procure Multipurpose Offshore Patrol Vessels respectively. The latter being extended during President Kovind’s visit to Mauritius in March 2018, yet again reiterated India’s commitment to securitizing Mauritius’ maritime interests.

As island nations with large EEZ’s, countries like Maldives and Seychelles have become proponents of the concept of Blue Economy. With a growing emphasis on Blue Economy in both India and Maldives, there is an opportunity for collaboration. With Mauritius being one of the first African nations to adopt policies related to Blue Economy, India can support the Maldives in terms of sustainable fishing, desalination, water reuse, renewable energy production, healthy ocean management etc. `

In conclusion, India and Mauritius owing to their historical and cultural links have both emerged as natural partners. With both the countries occupying a geographic space in the vicinity of choke points as well as some of the world’s most important energy shipping lanes. Hence, it is natural that both the countries have looked at each other for maritime cooperation with India providing the much-needed support in terms of capacity building of Mauritian naval assets. The opportunities for future cooperation in terms of Blue Economy are many and both Port Louis and New Delhi are likely to usher in a comprehensive strategic partnership.