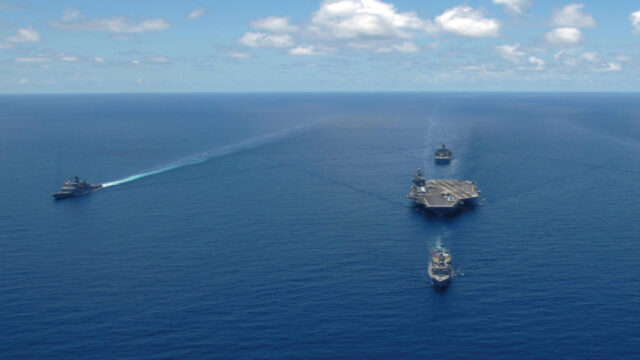 India and Japan are two countries that know the maritime domain well and continue to work hard to embrace the same. Being two nations with vast coastlines and island‑territories, maritime security is pivotal and a maritime bent‑of‑ mind is all but apparent in their respective, as also increasingly entwined are the national security considerations and strategies.  Maritime cooperation between the two countries takes place regularly during the meetings of several institutionalized bilateral forums. Some of these are the annual ‘2+2’ Foreign and Defense Ministers’ Dialogue, the Maritime Affairs Dialogue, the Defense Policy Dialogue, and the India‑Japan Annual Summit.

Strategic cooperation in the maritime domain is best epitomised by the Special Strategic & Global Partnership (SS&GP) of 2014 (India‑ Japan Vision 2025) with its predecessor, the Strategic and Global Partnership, allowing for deeper maritime cooperation. The multifaceted SS&GP dedicates considerable, credible, critical, and concerted attention to the maritime domain and it is only hoped that with more progressive ventures and newer endeavours between New Delhi and Tokyo.

The Indian Navy (IN) and the Japan Maritime Self‑ Defense Force (JMSDF) take part in several maritime‑ naval events such as the MILAN congregation of Indo‑Paci i􀀁c navies, the Japan‑India Maritime Exercises (JIMEX), and Indian Ocean‑linked bilateral exercises.  These are aimed at improving understanding, bettering interoperability, and ensuring maritime domain awareness (MDA) while also focusing on specialised training, sharing of best practices and methodologies of naval operations. India and Japan also participate in the MALABAR exercises,  together with their fellow Quadrilateral Security Dialogue (QUAD) members.  The 2021 edition of the JIMEX, an India‑Japan of i􀀁cial bilateral since 2013, took place in the Arabian Sea in October.  The Sahyog‑Kaijin, exercises between the Indian and Japanese Coast Guards, last took place in January 2020.

India and Japan also conduct the Maritime Partnership Exercise, routinely. A Japanese presence in the Indian Ocean, endorsed by Tokyo’s March 2016 reform, that enables the JMSDF to respond to threats faced by its partner countries, will only result in the deepening of the motives and objectives of the Indo‑Japanese Maritime Partnership Exercise.  In this regard, India is well placed geographically and, through its relationship with Japan, can invite the latter to become an Indian Ocean country and embrace the region more holistically and conclusively. In late‑February 2022, the chiefs of the two maritime forces of India and Japan met in New Delhi to discuss progressive avenues to further the cooperation in the maritime domain. Admiral Hiroshi Yamamura of the JMSDF, who was on a four‑day visit to the Indian capital, and Vice Admiral R. Hari Kumar of the IN engaged in productive discussions and deliberations.  Following the conclusion of the MILAN congregational event for the year 2022 following a COVID‑induced hiatus, the JMSDF Chief spoke about the Indian Ocean region (IOR) as being a domain not short of opportunities and the upcoming challenges for both India and Japan.  He praised the Indian Navy for its extensive engagements in its many areas of interest in the IOR.  The ships of the two navies often exchange goodwill visits through port calls with each other.  Navy‑ to‑navy issues are discussed during JMSDF‑IN Staff Talks, the last of which was held in February 2019.

A Maritime Affairs Dialogue takes place annually between New Delhi and Tokyo.  This was announced in 2013 and has become a staple event within the ambit of the India‑Japan Special and Global Strategic Partnership. The sixth edition of the Maritime Affairs Dialogue featured discussions on maritime security cooperation and India‑Japan maritime cooperation in the Indo‑ Paci i􀀁c. Among such Track‑I gatherings between India and Japan, the two countries engage in meaningful and results‑ oriented maritime and naval diplomacy.  As has also been the case, India and Japan remain active across multilateral forums that deal more generally with maritime security, sea piracy, maritime terrorism, disaster relief, and naval cooperation.  During the visit of the Japanese Prime Minister Fumio Kishida to New Delhi on March 19, 2022, the two countries signed six Memoranda of Understanding (MoUs) and agreed to a Clean Energy Partnership.

Bilateral trade of merchant goods between the two countries is all but maritime owing to the convenience offered by the medium to ensure the continuity of India‑Japan trade relations.  For both countries, the maritime domain is even more vital since a majority of the region’s bulk cargo and energy shipments transit through the Indian Ocean on their way to South and East Asia. Geo‑economic interests in regions such as East Africa (Asia‑Africa Growth Corridor, the Platform for Japan‑India Business Cooperation in Asia‑Africa), the Indian Ocean (West Container Terminal, Colombo Port), and Southeast Asia.  As per an Exim Bank study on India‑Japan trade prospects, two‑way trade amounted to over US$ 17 billion in 2019, prior to the COVID‑19 pandemic. With 12% of Indian exports to Japan comprising energy commodities such as petroleum products, India is bound to play an increasing and interesting role in helping Japan overcome its energy issues.

In view of so many recent developments and the prospects of a post‑COVID period now more visible than previously, India‑Japan maritime cooperation is on a stable, steady, and secure path.  It can be safely argued that pending reforms in the Japanese defence approach to the world and India’s maritime rise to encompass all key maritime zones while also productively engaging with the countries in the respective areas bears the potential for a lot more in the maritime domain.  The two partner countries, while fundamentally maritime in their con i􀀁guration and orientation owing to their geographical endowment, have yet to fully realise the aims, attitudes, objectives, and scope of their individual and combined maritime presence in their immediate waters as also foreign ones.

The long‑term aim is to emerge as powerful maritime nations with capable, capacious, effective, and ef i􀀁cient navies plying their trade on the best of maritime principles.  Maritime relations have also developed a multidimensional l􀀁avour to them with Japan’s Of i􀀁cial Development Assistance

(ODA) mechanisms (grant aid, in this particular case) providing for infrastructure investments in Indian island‑ territories such as the geostrategic Andaman and Nicobar islands.  These are reciprocated by India’s provision of expedient logistics and support to the Japan Maritime Self‑Defense Force (JMSDF) ships transiting the Bay of Bengal. Through the Acquisition and Cross‑Servicing Agreement (ACSA), Japan has provided India access to its naval base in Ambouli, Djibouti thus affording India, a presence in the western IOR, and its key geo‑economic interests such as the procurement of energy is obtained from fossil fuels.

(SAGAR) vision, the Act East Policy (AEP, since 2014), the Indo‑Paci i􀀁c Oceans’ Initiative (IPOI), and Japan’s Free and Open Indo‑Paci i􀀁c template (FOIP).  Most FOIP principles apply within the Indian Ocean’s space and this sub‑region is now being seen as one that craves as also merits a more comprehensive and exhaustive Japanese presence.  Prime Minister Narendra Modi’s SAGAR vision for the Indian Ocean region (IOR) is best coupled with Japan’s very own, and consistently broadening, geostrategic interests in the Indian Ocean.  The Act East Policy best symbolises the geostrategic approach under development by India to its partner countries in the east of Asia.  Japan is also the lead country in the maritime connectivity pillar of the Government of India’s Indo‑Paci i􀀁c Oceans’ Initiative (IPOI).

India and Japan are strong, able, committed and now, positively assertive maritime partners.  The two countries are on the cusp of realizing that the maritime domain is now no longer dominated by traditional parameters and provisions.  Critical emerging areas of cooperation such as cyber security

(impacting information systems on today’s ships, naval or otherwise), renewable energy, and the exploration  of seabed resources with the help of new technologies are all being featured as points to be noted concerning maritime security.With the landmark of 70 years of formal, productive, constructive, and fruitful bilateral relations having now been successfully achieved, the maritime focus of India and Japan vis‑à‑vis each other will only grow stronger.  The new Japanese Prime Minister, Fumio Kishida, has promised to invest upwards of US$ 42 billion in India, thus enabling the country’s rise toward becoming a US$ 5 trillion economy.  Japan is an indispensable maritime‑naval partner for India and vice‑versa, all the way more and increasingly so, in the vast maritime domain of the Indian Ocean and the Indo‑Pacific.