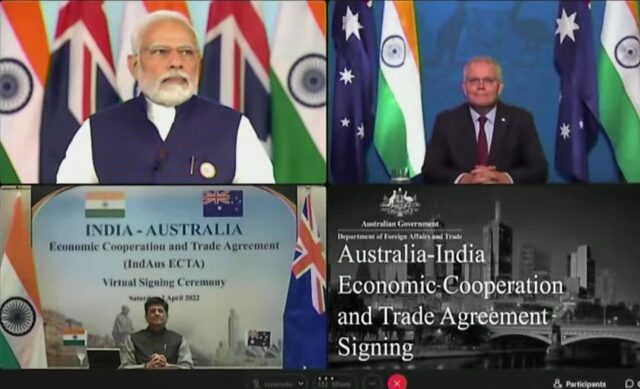 India and Australia formally signed an interim free trade deal on 2 April. The deal is not only going to improve economic ties between the countries, but it will also generally strengthen bilateral ties.

Prime Minister Morrison, who is going to call for a general election soon, is likely to use this deal to woo voters.

Morrison, welcomed the signing of the deal, as it opens the doors of the second most populous and one of the biggest economies in the world.

The Australian government is looking to diversify its export markets and bring down its dependence on China, which is also its current biggest trading partner. In recent years, Australia and China have been engaged in diplomatic spats leading Beijing to impose sanctions against some Australian products.

Under this agreement, 96% of Indian goods will enter Australia duty-free. Whereas India reduced tariffs on 85% of Australian goods entering India.

India and Australia will continue to work towards a full free trade agreement.

“Soon after this current agreement comes into force, we’ll get down to cracking the whip on the next stage to make this a comprehensive economic partnership,” Goyal said.

His Australian counterpart said he was confident negotiations would advance even if the Morrison government was replaced at the upcoming national election.

Australia goes to poll in May this year. So far opinion polls show Morrison as lagging.