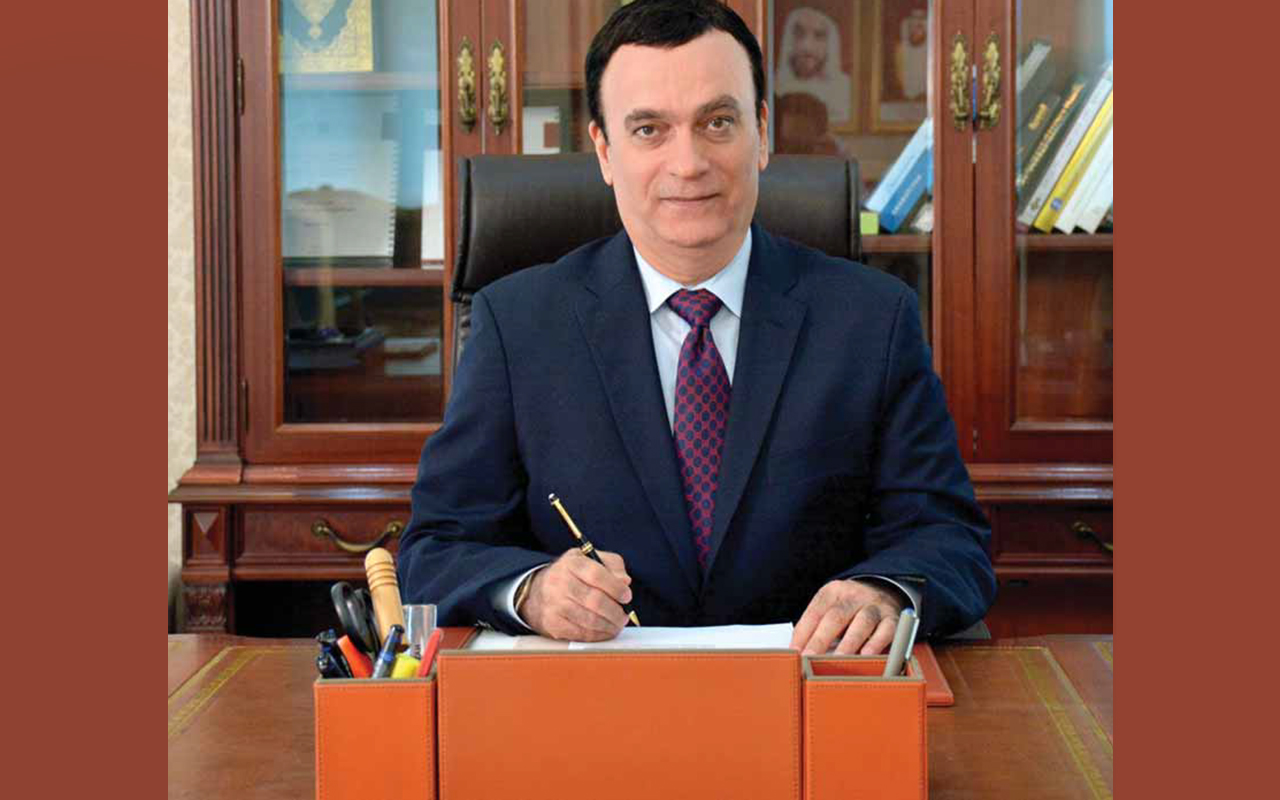 In an interview with Diplomacy & Beyond, Ambassador of the United Arab Emirates to India, H.E. Dr. Ahmed Albanna, shares his vision on India-UAE bilateral relations. As India seeks to enhance economic engagement and deepen security cooperation with the Gulf, it finds a willing partner in the UAE. Here are the excerpts..

The visit of Crown Prince of Abu Dhabi His Highness Sheikh Mohammed bin Zayed Al Nahyan to India as chief guest for Republic Day this year signifies growing engagement between India and the United Arab Emirates. As India seeks to enhance economic engagement and deepen security cooperation with the Gulf, it finds a willing partner in the UAE. In the evolving global scenario, trade, commerce, and foreign direct investment (FDI) would be the cornerstone of India- UAE ties in the 21st century. I think India and UAE can have significantly beneficial relations due to increased cooperation in the field of trade and commerce. Most recently on October 14-19, delegates from India also participated in the World Skills Summit in Abu Dhabi and at in November we have the UAE-India strategic dialogue, which will be followed by the India-UAE Partnership Summit. These developments reflect the evolving ties between the two friendly countries.

From the modest level of $180 million in the 1970’s to $53 billion in 2016-17, the UAE and India bilateral economic relations have come a long way. While the two countries already have strong investment relations in sectors such as Construction, Power, Metallurgical Industries, Services Sector, and Computer Software & Hardware, I believe a lot remains untapped as far the investment potential between our two nations is concerned. Recent bilateral visits at the highest level have given a whole new momentum to our ever growing relations. Sectors such as healthcare and medical facilities, where India has a comparative economic advantage as it is home to one of the finest medical and healthcare professionals, which could be a potential area for mutual cooperation. Besides this, India also has a well-established private medical infrastructure, medical facilities and expertise to provide world class medical care within a fraction of the cost spent in developed countries. Hence, medical tourism can be an important area where India can attract Emiratis.

In my opinion, Renewable Energy can also be another key area for establishing mutual cooperation. UAE, in recent times, has positioned itself as the world leader in the production and transmission of solar energy. The cost efficiency achieved by the UAE in the solar energy space is a fraction to that of India. Indian companies can leverage on the UAE expertise in this field. Defense Sector is yet another area with immense potential. With the policy framework in place, in terms of a MoU signed between UAE and India to further enhance cooperation in this sector, it is time for the two countries to work aggressively in this field. Lastly, in the Hydrocarbon Sector, Indian public sector companies have evinced their interest in seeking partnership in upstream engagements in UAE. Indian companies have also expressed their intent in acquiring a stake in ADCO. These proposals are being studied and we hope that things should move in the right direction. Space Exploration is yet another area where our two countries could work together.

Our cumulative investments in India are valued at around $11 billion. UAE is the 10th largest investor in India, some of the prominent UAE-based companies that are actively pursuing projects in India include Emaar, DP World, Abu Dhabi’s National Petroleum Construction Company, Abu Dhabi National Energy Company (TAQA), RAK Ceramics, Borouge, to name a few. India has certainly emerged as a bright spot in terms of attractive foreign investments due to the recent sweeping policy changes. We welcome these changes taken by the Indian Government towards creating a more conducive environment for foreign investors. Amongst the sectors mentioned, agriculture and allied industries hold a special importance for the UAE. Food Security is one of the priority sectors for the UAE Government. I am pleased to share that recently, one of our companies, Sharaf Group signed a MoU with India’s Ministry of Food Processing Industries worth $750 million, expected to create employment opportunity for about 25000 people in India.

Earlier this year, during the visit of His Highness Sheikh Mohammed bin Zayed Al Nahyan, Crown Prince of Abu Dhabi and Deputy Supreme Commander of the Armed Forces, to India, an agreement was signed between Abu Dhabi National Oil Company and Indian Strategic Petroleum Reserves Limited on Oil Storage and Management. We are extremely pleased at this development. The two concerned companies are in regular touch with each other and are working on the framework to implement the deal. We expect things to materialize soon.

The close friendship between the UAE and India is built on common goals, values and a sense of shared history – one that goes as far back as ancient pearling routes. Our economic ties form the cornerstone of our dynamic partnership. In my opinion, both of our countries strive for inclusive growth and create a better future for its citizens. This common goal also brings us together. We have signed an array of agreements over the course of last two years, which have helped us to elevate our ties to a whole new level. With the framework in place, we need to work towards implementing these agreements. India is our valued partner and our dynamic relations have acquired a strategic importance in the recent past. All I can say is that we are at an interesting juncture in this relationship and the future looks even more promising.

It’s not needless to emphasize that high-level visits always give momentum to implement bilateral agreements. The landmark visit of Prime Minister Narendra Modi to the UAE in August 2015 and the return visit of the crown prince in February 2016 set the momentum for enhancing the bilateral relations to a Strategic Partnership. An agreement to that effect was signed on January 25, 2017, apart from 13 other MoUs. India’s growing interest in the Gulf region driven by its economic and trade ties, energy stakes, and presence of some around 2.7 million Indians in UAE, are important factors pushing India and UAE to enhance their engagement.

UAE and India are united in their fight against terrorism in all its forms. Both the countries have already signed Extradition Treaty, Mutual Legal Assistance Treaty in Criminal Matters & Mutual Legal Assistance Treaty in Civil Matters for Extradition and Mutual Legal Assistance. These treaties came into force in May 2000. Recently the Indian government has approved the signing of an agreement with the United Arab Emirates for establishing an institutional framework for cooperation in the fight against terrorism. It will help coordinate an approach to combat international terrorism, organised crime and drug trafficking, illicit trafficking in weapons, ammunition, explosives, radio-active and nuclear material, money laundering, counterfeiting of currency and official documents, economic crimes, corruption and cyber crime. I think, this agreement will provide for mutual technical assistance including exchange of professional expertise and training of security and law enforcement personnel.

As far as the bilateral pact on maritime education and training is concerned I am sure that, the agreement will pave the way for mutual recognition of maritime education and training, certificates of competency, endorsements, training documentary evidence and medical fitness certificates for seafarers. And it will also ensure that the education, training and assessment of seafarers, as required by the Standards of Training, Certification and Watch keeping (STCW) Convention, are administered and monitored in accordance with of the STCW Code for each type and level of training assessment involved.

Security and Defense cooperation have added new dimensions to our ever growing relationship. This sector holds immense strategic relevance for both our countries. The ambit of the MoU signed earlier this year aims to establish cooperation in the identified fields of armaments, defense manufacturing and technology transfers. We are keen to work with India to further enhance our ties in this particular field and in my opinion the MoU would facilitate further investments and joint collaboration projects in times to come.

As mentioned earlier, we perceive India as our very close economic partner. We aim to continuously work towards scaling our relations to new heights. In this regard, it gives me immense pleasure to share that steps are being taken in the right direction with Abu Dhabi Investment Authority recently committing $1 billion in India’s National Investment and Infrastructure Fund (NIIF). With this development, ADIA has become the first institutional investor in India’s NIIF, which is again a testimony of our growing partnership.

As you know – there is no substitute for an educated and skilled population in forming a strong foundation for the economic development of the country. India has some of the fi nest higher education institutions in engineering and management fields and given their cost-effective and world-class education, they can be a major attraction for the UAE students who are looking for acquiring higher education and better skills. Further, there is a need for enhancing the people-to-people contacts for increasing interactions between think tanks, researchers and through academic exchanges for the development of better skills among UAE Students and Scholars.

The UAE always gives importance to its relationship with Asian partners particularly with India with whom it has largest trading partnership. These links brings us immense benefits. I am of the view that the UAE can extend its positive influence in the south and East Asia region through human development and infrastructure. With the fact that economic relationship has a promising future, the UAE with its historic links with other countries in the South East Asian region can work as a bridge to strengthen this relationship.

I extend my best wishes to the friendly people of India, wish Peace, Good Health and Prosperity to the entire family of the magazine and its readers. I am sure that bilateral engagements between UAE and India will strengthen and intensify further in times to come due to our shared values and interests.