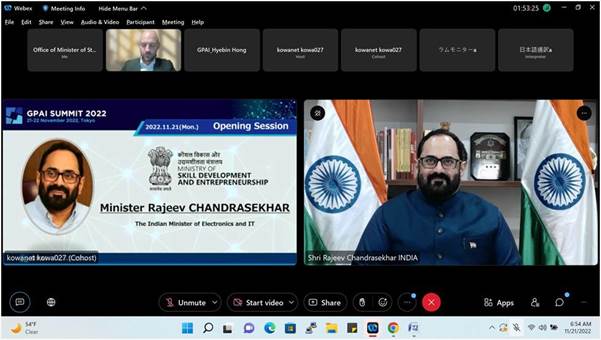 The third edition of the annual Global Partnership on Artificial Intelligence (GPAI) summit was held in Tokyo recently, and on the first day, India was handed over the group’s presidency for 2022-2023 by the outgoing council chair, France. At the summit, Rajeev Chandrasekhar, the Union Minister of State (MoS) for Electronics and Information Technology, represented India virtually at the GPAI summit. This development follows the assumption of the presidency of the G20, a league of the world’s largest economies.

While addressing the session, Minister Rajeev Chandrasekhar said that India will work in close collaboration with member states to establish a framework. He further said that around the framework, the power of artificial intelligence (AI) will be exploited for the good of citizens and consumers across the globe, while at the same time ensuring that there are adequate guardrails to prevent misuse and user harm. He added that AI is a kinetic enabler to take forward current investments in innovations and technology. With a national AI programme in place, a National Data Governance Framework Policy (NDGFP), and one of the world’s largest publicly accessible data sets programmes in the works, India is ready and committed to the efficient use of AI in order to catalyse the innovation ecosystem around AI and trusted applications for citizens and the global community. The main objective of the NDGFP is to ensure equitable access to non-personal data and focus on improving the institutional framework for government data sharing, encouraging the use of anonymization tools, and promoting principles around privacy and security by design.

In the election to the Council Chair, a two-thirds majority of first preference votes have been received by India. At the same time, the United States of America and Canada are the two next-best places in the tally. So, they were elected to be the two additional seats of government on the steering committee. According to the release, India being the chair will signify how the world today perceives India as a partner of trusted technology and as one nation that has advocated the ethical use of technology for transforming the lives of its citizens.

It is an international initiative to support responsible and human-centric developments and the utilization of artificial intelligence (AI). GPAI is a congregation of 25 member nations, which incorporates the US, UK, Australia, Canada, the European Union, France, Germany, Italy, Mexico, Japan, South Korea, New Zealand, and Singapore. India has joined the GPAI group in 2020 as a founding member. The main objective of this initiative is to bridge the gap between theory and practice in artificial intelligence by fostering cutting-edge research and related activities.

This initiative promotes a worldwide collaboration on artificial intelligence technology by bringing experts together from the areas of science, civil society, industry, government, academia, and international bodies on a single platform.

Artificial intelligence is anticipated to add 967 billion US dollars to the Indian economy by the year 2035. A total of 450 to 500 billion US dollars is expected to be added to India’s GDP by 2025, accounting for 10% of the country’s USD 5 trillion GDP target.