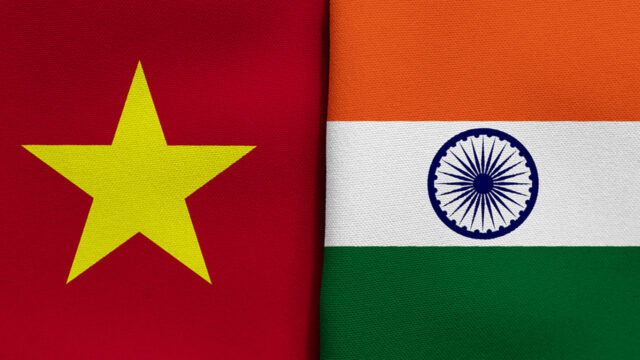 The United Nations Security Council (UNSC) in its recent meeting held on August 9, 2021, stresses that “maritime security is being undermined at an alarming pace by challenges around contested boundaries, the depletion of natural resources, and armed attacks.” This shows an emergency concern for all members of the international community and the relevance of oceans as continents are surrounded by waters that constitute 97 percent of the earth itself. It would affect Vietnam and India as well. The latter, as a peninsula that borders with the Arabian Sea in the west, the Bay of Bengal in the east and the Indian Ocean in the South, and Vietnam, surrounded with the South China Sea, are major countries in Asia struggling to maintain international law. They will also face ramifications in changing maritime order.

Vietnam-India relations are based on centuries-old cultural ties and modern diplomatic relations is established in the year 1972, and they also have a shared journey in the affairs of maritime cooperation. Given their colonial subjugations and historical humiliations, Vietnam and India are increasingly becoming crucial players as far as maritime safety and security are concerned. India although has no explicit territorial disputes in the South China Sea, however, according to Vijay Gokhale, former Foreign Secretary of India, maintains that “the South China Sea is not China’s sea but a global common and Indians have sailed these waters for well over 1,500 years…historical and archaeological proof of a continuous Indian trading presence from Kedah in Malaysia to Quanzhou in China.” On the other side, the Socialist Republic of Vietnam is strategically located in the Southeast Asian region and is part of several regional and international organizations. As an ASEAN member, it has committed to its centrality and unity. India since the ASEAN formation in 1967 has fostered it and reinforced its relationship after the Cold War. Vietnam is an important strategic partner of India and the former likewise expects the latter to play a big role in the region in order to balance the peaceful rise of the Peoples Republic of China (PRC).

With particular regard to the South China Sea, Vietnam and India seek to converge their strategic interests at the onset and concluded their comprehensive strategic partnership in the year 2016 which began in 2007 as a strategic partnership. This development sets another milestone in their comprehensive relationship. For India, Vietnam is an important country in its ‘Look East Policy,’ which is now the ‘Act East Policy.’ Likewise, their trade volume has mounted up from US$ 200 million in 2000 to US$ 12.3 billion in the financial year 2019-2020. Their increasing tie is also pivotal when it comes to the South China Sea and its maritime security and safety which have been neglecting affairs in the region.

Decoding Maritime Safety and Security in the South China Sea

The concepts of safety and security are normally not examined in the domain of maritime studies; they have been loosely studied and researched by scholars. These concepts are comprehensive which includes traditional and non-traditional insecurities, climate change is a major one. These years, particularly, after the Cold War, the non-traditional security threats are becoming prominent. In maritime space, notably the South China Sea, insecurity and threats come from the diminishing of marine resources leading to climate vulnerability to the littoral states; Vietnam has also been facing such threats from non-traditional areas. Whereas the building of artificial islands and other PRC activities is also posing a significant threat to the commercial interests of other countries. Given most Southeast Asian countries including Vietnam find fish as their major source of food, however, “decades-long, unabated fishing has resulted in declining fish stocks and given rise to one of the biggest non-traditional security threats to the region—overfishing.”

South China Sea dispute is between the PRC and several Southeast Asian countries, such as Vietnam, Malaysia, Brunei, and the Philippines. The Association of Southeast Asian Nations (ASEAN) establishes several norms to be followed by the claimant parties in order to maintain the status quo in the region, this often appears to be not followed otherwise. Vietnam had two major conflicts with the PRC over the Paracels and the Spratlys in the South China Sea.

The behavior of states in the South China Sea is managed by international law and the United Nations Conventions on the law of the Sea (UNCLOS) which limits the activities of assertive powers. The Philippines filed a suit to the International Court to check the historical claims of PRC and its cautious activities in the South China Sea and as a result, the Permanent Court of Arbitration declared the PRC claims ‘illegal’, which the PRC rejected the order is discriminatory. Thus, South China Sea has been contentious water, of which errors could be searched during the colonial periods as well.

Committed to the ASEAN Centrality

The Association of Southeast Asian Nations (ASEAN) came into force during the Cold War and for a long time was seen from the suspicious eyes by several countries such as the PRC. The objective of ASEAN was “to establish a firm foundation for common action to promote regional cooperation in South-East Asia in the spirit of equality and partnership and thereby contribute towards peace, progress, and prosperity in the region.” Likewise, the ASEAN organization is a key regional organization that seeks to shape the behavior of claimants and other parties in the South China Sea. India since the beginning has been working with the ASEAN organization and committed to maintaining ASEAN centrality as its policy posture.

India shares the vision of the ASEAN outlook on the Indo-Pacific region based on normative frameworks and international law with inclusivity. While maintaining a close distance from strategic competition, ASEAN believes in “an open and inclusive regional order based on dialogue and cooperation.” For India’s Look East policy (now Act East policy), the ASEAN organization has been prioritized as a major player in maintaining regional peace and stability.

From Divergence to Convergence in the South China Sea

The Cold War period has been a dark time in the Vietnam-India relationship because during this time their bilateral relationship could not thrive due to the pressure of Cold War rivalry led by the Soviet Union and its socialist bloc and the United States and its capitalist blocks. This ideological wrestling also led to several proxy wars in the world including Vietnam War. Nonetheless, the post-Cold War and the disintegration of the former Soviet Union (now Russia) began a new chapter in the Vietnam-India relationship, although their diplomatic relationship has already been set up during the Cold War. The 1974 and 1988 defeats by the PRC over the islands chain (Paracels and Spratlys) made more cautious Vietnam and the same happened in the case of India in the 1962 border war with the PRC. These incidents provided opportunities for Vietnam and India to converge their long-term strategic interests that include economic, cultural, and the South China Sea notably. At present, according to the Vietnam Briefing, “over 200 Indian investment projects in Vietnam are primarily focused on sectors including energy, mineral exploration, agrochemicals, sugar, tea, coffee manufacturing, IT, and auto components.” This exhibits how their relations are ameliorating by integrating sectors and opening scope for maritime cooperation. Given the increasing trade relationship, India and the ASEAN members signed a free trade area (AIFTA) in 2009. As a major trade partner, Vietnam’s trade has mounted up as statistics demonstrated above.

Besides, maritime cooperation is a key instrument in Vietnam and India bilateral relationship. Over a virtual summit held in December 2020, the Prime Minister of Vietnam, Nguyen Xuan Phuc, and Prime Minister of India, Narendra Modi, acknowledged “to increase military-to-military exchanges through regular ship visits, joint exercises, and training and capacity building programmes across three services and coastguards” (Sharma, Dec 2020). This increasing maritime cooperation between Vietnam and India could be seen how the Nha Trang Port located in the southern part of Vietnam has often been allowed access by India and Vietnam’s peoples navy being trained by India and their joint naval exercises in the Indian Ocean. These advancements themselves convey a precise message that in the context of changing geopolitical equations their maritime cooperation shall not be undermined.

Securing peace and maintaining order has been a major challenge among countries at the onset. The United Nations (UN) in its Chapter V contains the provision of the Security Council and its principal task to monitor advancements in international politics and maintain international peace and security under Article 24. The issues of international relevance have been discussed in the UNSC meeting before by the fifteen members of the Council. For the first time, the UNSC meeting for August 2021 has been chaired by the Indian Prime Minister and opened the session on maritime security and its potential impact on the global community. As a non-permanent member, India demonstrated its maritime visions based on international law which was reinforced by other crucial members too. Vietnam also participated. The Prime Minister of Viet Nam, Pham Minh Chinh, noted in his virtual address that “states and international organizations develop a comprehensive, extensive and profound awareness of the importance of oceans and seas, and the threats to maritime security.” This was shared by India as the head of state points out the importance of the sea as “our shared global commons and a lifeline of international trade.” Both Vietnam and India are affirmed that any disputes linked to maritime security should be resolved peacefully. India also stressed, “for conservation of the maritime environment and marine resources, greater cooperation in ocean science research and responsible maritime connectivity.”

Moreover, it is no secret that Vietnam-India bilateral relations have improved after the Cold War period. In recent years too, “maritime cooperation between India and Vietnam has been the most significant element of bilateral defence and security cooperation, and both sides have found mutual convergences on cooperation in the South China Sea and the wider Indo-Pacific region.” They also need to cooperate on maritime resource preservation in order to maintain a cordial relationship.

After examining Vietnam-India relations, it could be stated that it is their cultural roots searched in the form of Buddhism which reinforced other areas such as security and safety cooperation in the South China Sea. Given the contested nature of the sea, rules and international law concerning it should be abided by all parties; this assumption is also shared by India’s vision of maritime security and Vietnamese maritime posture, now the ASEAN outlook on the broader Indo-Pacific region sharpened the teeth.

Thus, Vietnam-India equations have become more deepened as they cooperate on naval exercises, infrastructure building, energy cooperation, manufacturing areas, and so on. This trend sends a signal to other countries in the region that their relationship would keep strengthening amidst of rising activities of close neighbors. In the August 2021 UNSC virtual meeting, Vietnam and India share the common vision of maritime security and safety and implicitly focusing on the blue economy that is equally important as far as the South China Sea conflict is concerned.