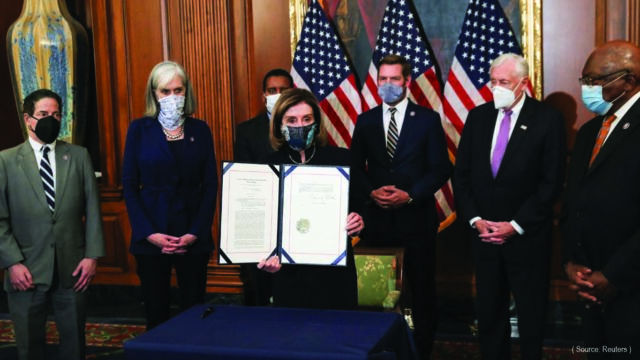 January 14, 2020: The US House of Representatives voted to impeach Donald Trump on January 13. With this, he became the first president in US history to be impeached twice.

The house voted 232-197 on impeachment with 10 Republicans voting in favour of impeachment with Democrats in the House of Representatives to charge him with inciting an insurrection in last week’s violent rampage in the Capitol.

“Today, in a bipartisan way, this House demonstrated that no one is above the law – not even the president of the United States, that Donald Trump is a clear and present danger to our country, and that once again we honored our oath of office to protect and defend the Constitution of the United States, so help us God,” said Speaker Nancy Pelosi.

However, the chances of Mr Trump being ousted are low since the Republican controlled Senate will not convene until January 19 and president-elect Joe Biden is set for inauguration for January 20. If the Senate convicts Trump it could lead to a vote on banning him from running for office again.

The Republican party leaders in the House of Representatives did not appeal for a vote in the party’s favour and called the vote a matter of individual conscience.

Liz Cheney, the Republican leader who voted in favour of impeachment said, “I am not choosing a side, I’m choosing truth. It’s the only way to defeat fear.”

“Even if the Senate process were to begin this week and move promptly, no final verdict would be reached until after President Trump had left office. … In light of this reality, I believe it will best serve our nation if Congress and the executive branch spend the next seven days completely focused on facilitating a safe inauguration and an orderly transfer of power to the incoming Biden Administration,” he said in a statement.

So far, no US president has ever been removed from office through impeachment. Three were previously impeached by the House of Representatives – Trump in 2019, Bill Clinton in 1998 and Andrew Johnson in 1868, but were acquitted by the Senate.