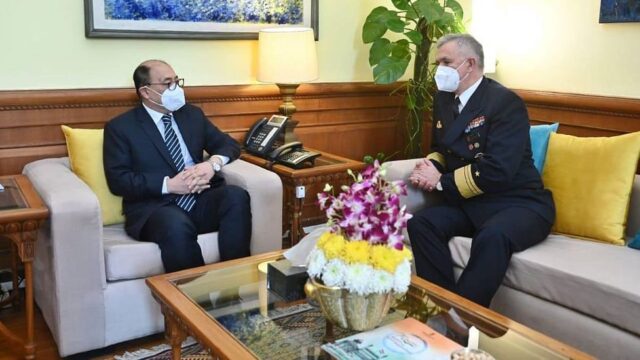 Significance of India’s Defense and Security Cooperation with Germany

As democracies, both India and Germany share common values and actively support a rules-based international order. The strategic partnership between India and Germany is unique. New momentum in the Indo-German security partnership was achieved in 2006 when Federal Defence Minister Dr. Franz Josef Jung and the Indian counterpart Shri Pranab Mukherjee signed a new defense and security agreement. The agreement envisaged a deeper strategic bilateral partnership regarding security and defense affairs, including training of military personnel, increased cooperation for technology transfer, joint development of high-end defense equipment, and creation of the Indo- German High Defense Committee (HDC). In recent years, bilateral defense and security relations have become ever more profound, with more than thirty high-level consultation and dialogue formats concerning international and global challenges. In 2007, during Federal Chancellor Merkel’s visit to India, an agreement on mutual protection of classified material was reached, thus enhancing cooperation in the intelligence sector. Concerning their fight against terrorism, the collaboration between the intelligence services is of great importance. On defense cooperation, India had witnessed the visits of three German armed services chiefs in only two years. In the latter part of 2006, the German Navy Chief, in 2007 the German Air Chief, and 2008 the German Army Chief visited India, meeting with high-level officers from the Indian armed forces. Meetings and cooperation in defense and security underline that Germany increasingly realized how important India is as a source for regional stability and peace. In 2008, the first joint naval exercise between India and Germany took place off the coast of Kochi. The German maritime task force participated with over seven hundred men in the three-day maneuver. The Federal German Ship F220 Hamburg, an air-defense ship, the frigate F211, and the replenishment tanker FGS Berlin cooperated and trained successfully with the INS Tir and INS Krishna from the Indian Navy. The recent efforts to strengthen military cooperation and deepen relations in defense and security have added another component to the bilateral ties between India and Germany, enriching the partnership between the two with an actual strategic dimension. As part of the Indian Navy’s bilateral engagement with the German Navy, the INS Teg participated in the Hamburg Port Festival in 2012. INS TARANGINI participated in Hanse Sail Rostock/ Sail Bremerhaven in August 2015.

Both India and Germany have been strategic partners since 2001, and the launch of the Inter-Governmental Consultations (IGC) in 2011 imparted momentum to this strategic partnership. Several joint agreements and dialogue mechanisms on security affairs have been incorporated during bilateral meetings held across the last seven years, including Joint Working Group on Counter-Terrorism, Cyber Consultations, and Joint Steering Group on Disaster Management. The Joint Declaration of Intent on bilateral cooperation on Cyber Policy was signed in May 2017, formalizing annual German-Indian cyber consultations. Both the governments in 2017 also agreed to hold regular meetings of the Joint Working Group on Counter-Terrorism. And to further enhance the defense Cooperation between Germany and India, the arrangement on the Implementation of the Security Agreement signed in 2006 concerning bilateral defense cooperation was signed in February 2019 in Berlin. During the fifth IGC, both states decided to institutionalize the Foreign Office Consultations (FOC) mechanism between the Foreign Secretary of India and the State Secretary of the Federal Foreign Office to establish a track 1.5 strategic dialogue in an open exchange of views and ideas to enhance mutual understanding of national, regional, and strategic interests and work out recommendations for joint engagement and action on individual policy areas.

Germany’s Defence Minister H.E. Ursula von der Leyen visited India in May 2015, and former Raksha Mantri Nirmala Sitharaman visited Berlin in February 2019, and the two Defence Ministers signed an agreement to expand the defense cooperation. In addition, both countries have recently created a new dialogue format that will focus primarily on aspects of military policy to form a reasonable basis for cooperation on defense and security policy issues.

The defense dialogue mechanisms include High Defence Committee Meetings at Defence Secretary level, Military cooperation Sub-Group Meeting, and Defence Technical Sub Group Committee meeting. A meeting between Defence Secretary and Parliamentary State Secretary was held during the fifth IGC in New Delhi in November 2019. Due to the COVID-19 pandemic, the tenth HDC was held via video conference on January 12, 2021.

The significant exports since 1999 from Germany have been parts for the construction of ships and submarines for the Indian Navy and technology for the respective fire control systems, SONAR, and other navigation systems. Other exported equipment included aircraft parts, helicopters, tanks, and other military vehicles. Germany is the fifth-largest exporter of arms and defense equipment to India. German defense contractor ThyssenKrupp Marine Systems (TKMS) has signed a $38.4 million contract to modernize two Shishumar-class (Type 209/1500) diesel-electric attack submarines with the Indian Navy in 2016. Also, in 2020, India approved the TKMS bid with an estimated value of more than $5.5 billion to manufacture Type 218 Invincible-Class submarine with Air Independent Propulsion (AIP) technology for the Indian Navy giving a boost to Make in India.

“You don’t want only to buy, but you want a close cooperation by manufacturing and producing parts in India too, which I think is a brilliant approach for both sides as close cooperation between strategic partners should never be a one-way cooperation or collaboration.”

-Ursula von der Leyen, The Former German Defense Minister, when on a visit to India in 2018

Germany is keen on deepening its partnership with India, especially in cyberspace, maritime cooperation in the Indian Ocean region, and defense production, including submarines. Germany and Europe depend on secure trade routes, access to markets, and stable international order. A strategic partnership with India is of utmost importance, and more than 20% of German trade happens through the Indo-Pacific region. With India as its centerpiece, the Indo-Pacific features prominently in Germany’s foreign policy outreach with the arrival of the German Navy frigate Bayern in Mumbai on January 20, 2022. With India celebrating its seventy-fifth year of independence, the visit further signals that Germany is all set to sail for a powerful and strategic partnership, in calm waters and heavy seas alike, to enhance further and deepen its defense and security ties with a strategic partner like India.