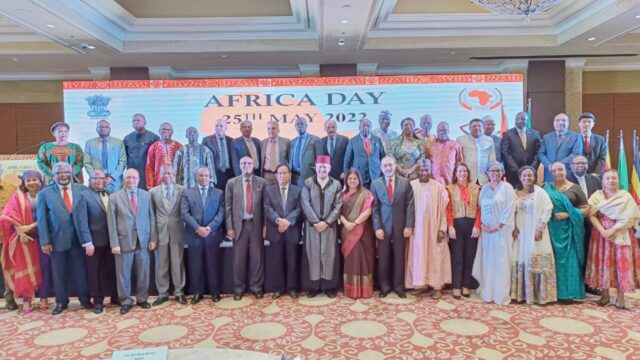 Africa Day is celebrated every year on the 25th of May to commemorate the indelible mark left by the Organisation of African Unity (OAU) on the African continent. The OAU was founded when the leaders of 30 of the 32 independent African states came together to form an organisation of African countries on the 25th of May 1963. The OAU developed and paved the way for a greater African Union on the 9th of July 2002. Hence, the year 2022 implies the 20th anniversary of the African Union. The AU is guided by its vision of “An Integrated, Prosperous and Peaceful Africa, driven by its own citizens and representing a dynamic force in the global arena.” As remarked by the H.E., President of the UN, Mr Abdulla Shahid, this year’s theme was to position the focus on “malnutrition and food insecurity” across the continent. African Union stated that the theme on the occasion of 20 years of Africa Day is “Strengthening Resilience in Nutrition and Food Security on the African Continent: Strengthening Agro-Food Systems, Health and Social Protection Systems for the Acceleration of Human, Social and Economic Capital Development.”

Africa Day was previously known as Africa Freedom Day and Africa Liberation Day. The Organisation of African Unity was founded as a manifestation of the “pan-African vision,” that is, the concept of an Africa which is united, free and in control of its fate. The founding fathers of the OAU came together and recognised the value of freedom, equality, justice and dignity to each African individual. The guiding philosophy of this organisation focused on African socialism, African unity and a powerful drive to accept and embrace African culture and common ethnic heritage. Africa is a country of varied and multicultural ethnicities and Agenda 2063 of the African Union, entitled “The Africa We Want” truly commemorates each African individual’s presence and worth. Agenda 2063 is Africa’s masterstroke for remodelling Africa into one of the global powerhouses of the future. It is the continent’s strategic framework which aims at achieving an all-inclusive and sustainable Africa by bringing along greater collaboration and support for African led initiatives.

For the past two years, Covid-19 Pandemic has been a menace to economies around the world and Africa too was affected very badly by it, however, it is remarkable how Africa is trying to rise on its own and African women are an integral part of the solution. This is especially because Africa has been successful in breaking the barriers set by strict gender roles. Appreciation also goes out to the African youth who have a crucial role to play in building Africa into a major continent globally securing that the needs of all African individuals besides their distinctive nationalities are met.

African Union Commission’s Chairperson, H.E. Moussa Faki Mahamat, remarked on this auspicious occasion, “The date of May 25 has a double evocative power. On the memorial level, it takes us back to the youthful freshness of the first moments of the OAU. At the geopolitical and institutional level, it constantly questions our individual and collective capacity to build the Africa then dreamed by our founding fathers.” Africa indeed is a home for hope and it is no doubt that Africa has an enormous capacity towards overcoming all the challenges that come its way. The Chairperson also remarked promisingly, that, Africa is at that point in history where it is embarking on a new path, a path where the nations are stronger and the leaders are closer to their citizens. He also addressed the urgent need of developing new forms of resistance in Africa because this is a world where “multilateralism is sorely tested.” Hence,  “Africa must stop expecting solutions from others.” Africa should no longer be an accomplice to how other continents and countries perceive it.

African Heads of Missions situated in New Delhi and the Ministry of External Affairs jointly celebrated Africa Day on the 25th of May 2022 at Hotel Taj Palace, New Delhi. Minister of State for External Affairs, Dr Rajkumar Ranjan Singh delivered his keynote address as Chief Guest on this auspicious occasion and highlighted multidimensional relations with African countries. India shares a long history of traditions and history with Africa which has further strengthened through intense and consistent political engagement from both sides, including 34 visits at the level of Heads of State / Heads of Government and Vice President from India and more than 100 incoming visits by African leaders to India. It is remarkable to note that the Indian Union Ministers have visited every country in Africa. The ten guiding principles propounded and propagated by Prime Minister Sri Narendra Modi on India’s engagement with Africa have been serving as a major instrument in India’s multifaceted relationship with Africa in a constantly changing world. Smt. Meenakashi Lekhi, Union Minister of State for External Affairs & Culture partook in the celebrations of Africa Day in India, she said in a tweet, “India & Africa share a deep friendship that draws from our common heritage. We are committed to furthering our south-south cooperation & working together for a representative & democratic global order.”