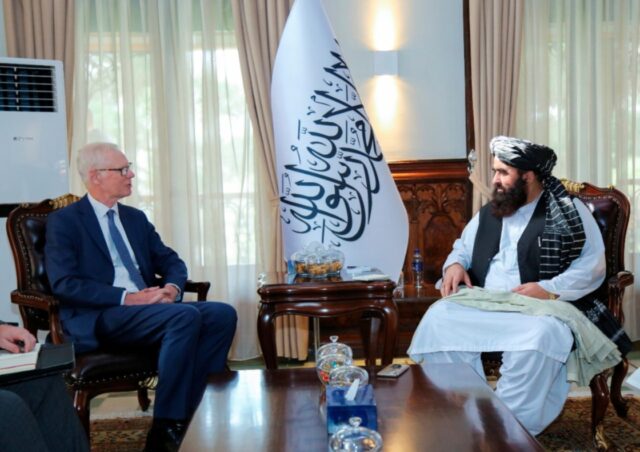 On 5th October 2021, British Prime Minister Boris Johnson’s special envoy met with Taliban leaders in Afghanistan to discuss the humanitarian crisis and ways to prevent the country from becoming an incubator for militants. Simon Gass, Prime Minister Johnson’s high representative for Afghanistan met with Taliban leaders including Amir Khan Muttaqi, Mullah Abdul Ghani Baradar and Abdul Salam Hanafi. Simon Gass was accompanied by chargé d’affaires of the UK Mission to Afghanistan in Doha. During the meeting issues like how the country can be helped from the humanitarian crisis, the importance of preventing the country from becoming a hub for terrorism and the need for continued safe passage for those who want to leave the country were discussed. Further, the issue of the treatment of minority groups and the rights of women and girls were also raised. Countries like Pakistan have been insisting and pushing for the international community to engage with the new rulers and help stabilise a country threatened by famine.

As per the statement by Abdul Qahar Balkhi, the Taliban’s foreign ministry spokesman, the meeting was focused on detailed discussions about reviving diplomatic relations between both countries.

The Group that overruled the previous government in August and ousted the US-backed government has been asking for better relations with the other countries as well as finical support to help the country through the transition. The new rulers have been courting hesitant foreign powers in a bid to restart cash flows to the country, where civil servants and healthcare workers have gone months without salaries.

The Taliban has been warned by the western countries over their brutal and unjust behaviour towards the women population. Although in few provinces of the country girls have been allowed to get back to school and get the education that was previously denied to them, yet there have been no major or significant changes. As per reports, the Education ministry official Mohammad Abid has stated that there has been no policy change from the interim central government and high schools are still closed for girls. The Taliban, which has permitted girls to attend primary school, have said girls will return to secondary schools once their security and strict gender segregation under sharia law can be ensured. Some of the women civil servants have also been called back to work which might be just a way to ease the international pressure.