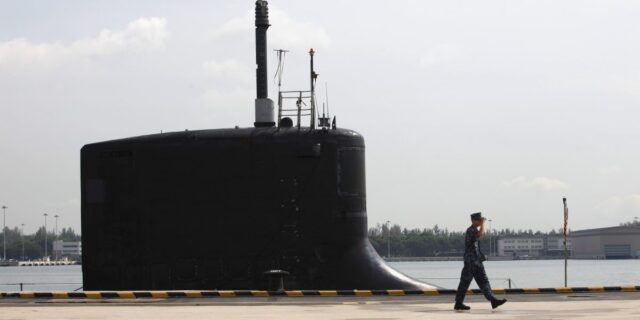 It is a new tripartite strategic defence alliance between Australia, the United Kingdom, and the United States, aimed initially at building a class of nuclear-powered submarines, but also working together in the Indian Ocean region. – The Pacific Ocean, where the rise of China is seen as a growing threat and is to develop wider technologies.

The formation of AUCKUS was announced on September 15, 2021, for the Indo-Pacific region. Under the treaty, the United States and Britain would help Australia buy nuclear-powered submarines. The US and the UK have shared this nuclear technology in an arrangement dating back to 1958.

IMMEDIATE IMPACT OF THE DEAL

The immediate response came from France and it was not happy with the deal because in 2016 Australia signed a $70 billion deal with France for the Supply of Conventional Submarines. With AUKUS being signed this deal with France is

canceled. The France Foreign Minister made a statement that ‘France is feeling backstabbed’.

As expected China has condemned the agreement and has been accused of it as “extremely irresponsible” behaviour. Foreign ministry spokesman Zhao Lijian said it “seriously undermines regional peace and stability and intensifies the arms race”.

China’s embassy in Washington accused the countries of a “Cold War mentality and ideological prejudice”.

Russia upheld the concerns voiced by China on AUKUS, as defense organization together was shaped with the deliberate of intimidating China, at a meeting of the UN General Assembly’s First Committee, To begin with, saying that they are authentic concerns as this kind of participation is related to the atomic field and incorporates a military measurement.

However, the broader strategic question is what is its significance for India? Does it shadow the QUAD alliance?

India so far has not reacted to it officially. In case QUAD is likely to contain China’s financial ability, AUKUS is likely to contain its military muscle-flexing within the oceans, which it has been doing in the South China Ocean within the last few years.  Indian Foreign Secretary Harsh Vardhan Shringla said the deal was “neither relevant to the Quad, nor will it have any impact on its functioning.”

For India, the formation of the new Indo-Pacific coalition AUKUS—among Australia, the United Kingdom, and the United States—is welcome for several reasons.

• Powerful Allies Equals Powerful India – The AUKUS cooperation strengthens the Quadrangle and gives further weight to important allies like India, which provides the military balance in the Indo-Pacific region.

• Strengthening QUAD AUKUS will also accelerate the capabilities of the QUAD in fields like cybersecurity, Artificial Intelligence, Quantum technology, and advanced dumdums.

• It also opens up openings for cooperation in these areas for India and Japan.

• Net Positive Against China Any alliance or cooperation that benefits the multinational structure as opposed to China is a net strategic positive for India.

According to C.Rajamohan- From New Delhi’s perspective, the new coalition signals a strong political resolve in Washington to confront the growing security challenges from Beijing. In ending the long-standing taboo on transferring military nuclear propulsion technology even to its allies, the United States is also acknowledging that deterring China requires outside-the-box thinking.

However, with AUCKUS there are some concerns for India for example Change of Power in the Indo-Pacific, a solicitude for India is that the U.S. is now promoting security cooperation with its English abettors which India isn’t a part of. It might conceivably upset the balance of power in the region, and set off new pressures to India’s east while substantial turbulence in India’s west is caused by the recent change of government in Afghanistan. It can also lead to the crowding of Nuclear Submarines in the eastern Indian Ocean, eroding India’s indigenous pre-eminence though the Indian Navy presently dominates the space, its conventional underwater capability has been shrinking. There is also skepticism regarding the future of India. Analysts say that the chances are likely for the two countries to look up to their advantage if an analogous condition arrives in the future that involves India.

In pair with the US and the UK, Australia is all set to play a more vigorous part in guaranteeing peace and solidness within the Indo-Pacific region. In the nonappearance of any mammoth union particularly for the Indo-Pacific region, associations like AUKUS are likely to come into play. Meanwhile, India can see forward to France as a conceivably greater partner, particularly when the latter has had a setback from its allies. The two presently have an improved chance at commonly collaborating, financially as well as for guaranteeing security within the Indo-Pacific. and at the same time, India needs to build more Nuclear-powered Submarines indigenously, if it has to maintain the safety and security of its maritime borders as well thwart any sinister designs of China in South Asia.