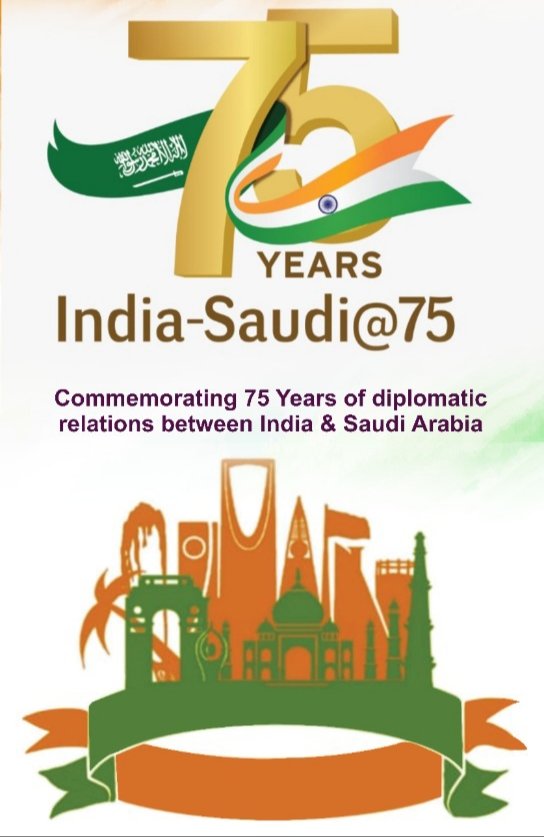 Based on the edifice and a strong foundation of historic and cultural ties built over the centuries, India and Saudi Arabia have been able to grow a stronger multifaceted relationship over the decades after their independence. The trajectory of growth of their bilateral ties suggests that India and Saudi Arabia have a promising and bright future together, given their pace of cooperation and engagement.

As India celebrates 75 years of Independence, it is important to commemorate its 75th diplomatic relations with one of its key strategic partners Saudi Arabia. India and Saudi Arabia share friendly and cordial relations, marked by mutual respect and understanding, as historically, the two significant leaders in the world share centuries-old economic and socio-cultural ties. Their bilateral relations gained momentum after India and Saudi Arabia gained independence and became sovereign countries. The 21st century marks the deepening of engagement and the establishment of a strong strategic partnership between India and Saudi Arabia as both countries enhance, diversify and strengthen their cooperation in the field of commercial relations, maritime security, medicine, space cooperation, infrastructure, and energy security.

The first diplomatic evidence of the two sovereign countries’ India-Saudi Arabia bilateral ties dates back to 1955 when Saudi King Saud made a 17-day visit to India. This was reciprocated by a return visit to Saudi Arabia by Indian Prime Minister Jawaharlal Nehru in 1956 as the two countries decided to promote peace, progress, and freedom across the world. The official visit of Indian Prime Minister Indira Gandhi to Saudi Arabia in 1982 further consolidated the bilateral ties between the two countries.

A watershed moment in the bilateral relations between India and Saudi Arabia was the historic visit of King Abdullah to New Delhi in 2006, which culminated in the formation of the “Delhi Declaration”. King Abdullah was the Chief Guest for India’s Republic Day celebrations and the leaders of the two countries committed to a strategic energy partnership. Marking a major turning point in the bilateral relations between the two countries, the leaders decided to work towards international peace and stability, expand and diversify mutual trade and develop a strategic energy partnership for stable and evergreen long-term crude oil supplies, and encourage Saudi investments in oil refining in India. The two countries agreed to encourage economic cooperation and work together to promote cooperation in the field of technology, biotechnology, and non-conventional energy technologies. India agreed to assist Saudi Arabia to develop the ICT Centre of Excellence and promote cooperation in the field of education by opening up new opportunities for Saudi students to pursue post-graduate and doctorate level studies in technical institutions in India. The countries also agreed to seek prospects of cooperation in the health sector, health services, exchange of health personnel, and pharmaceuticals. In 2010, Prime Minister Dr. Manmohan Singh’s visit to Saudi Arabia led to another major milestone in the bilateral relations between India and Saudi Arabia as the countries signed the “Riyadh Declaration”. The visit converted what was initially called a bilateral engagement, into a strategic partnership as the two countries showed a commitment to raising the cooperation in economic, defence, security, infrastructure, energy sector, and political areas. Thus, the first decade of the 21st century heralded a new era of cooperation characterized by the deepening of bilateral relations between India and Saudi Arabia. The Delhi Declaration and Riyadh Declaration continue to be two significant documents guiding the future trajectory of relations between the two countries. The two leaders emphasized the expansion and engagement as well as the strengthening of relations with the visits of ministers, officials, business, academia, and media, the foundations of which were laid during the Delhi Declaration.

The second decade of the 21st century witnessed tremendous growth in the strategic relations between the two countries marked by four important visits by the leaders. In 2014, the then Saudi Crown Prince visited India; in the year 2016, Prime Minister Narendra Modi visited Riyadh twice in April 2016 and later in October 2019. In 2019, Crown Prince Mohammed bin Salman made an official visit to New Delhi. India and Saudi Arabia signed a highly important Strategic Partnership Council Agreement thereby making India identified as Saudi Arabia’s strategic partner country under “Vision 2030”. This move essentially took the relationship between the two countries to new heights as twelve MoUs and agreements were signed to diversify the areas of cooperation into key strategic elements such as energy, security, defence, civil aviation, technology and IT, health sector, education, trafficking, petroleum reserves, cooperation between stock exchanges, etc.

Saudi Arabia is India’s fourth-largest trade partner after China, the USA, and Japan. Saudi Arabia contributes to India’s 18% crude oil requirements. Saudi Arabia is also a major source of Liquified Petroleum Gas imports for India. In 2018-19 India-Saudi Arabia bilateral trade touched US $34.03 billion as India’s imports from Saudi Arabia were around US $28.47 billion and the exports reached US $5.55 billion.

As of December 2017, about 322 Indian companies had entered the markets of Saudi Arabia as joint ventures in the field of Information Technology, management and consultancy services, financial services, software development, pharmaceuticals, construction projects, and telecommunications. Similarly, major economic giants entered the Indian market thereby investing in its refineries, oil and gas, and petrochemical projects as well as power projects.

The landmark visit of India’s Chief of Army Staff General M.M.Naravane to Saudi Arabia brought another dimension to India – Saudi Arabia’s strategic cooperation as the two countries decided to cooperate in the areas of sharing military intelligence, cybersecurity, and combating terrorism. The beginning of the third decade of the 21st century witnessed a remarkable turn in the bilateral relations between the two countries as they conducted the first-ever joint naval exercise in 2021, called The Al-Mohed Al Hindi 2021 to allow the naval forces of the countries to enhance their understanding on maritime security.  Both countries are looking forward to entering the realm of space cooperation as well.

Collaboration against Covid-19: Towards Deeper Friendship

A health emergency created by the second wave of Covid-19 brought the two countries closer as both supported each other in their respective capacities. As a goodwill gesture, Saudi Arabia supplied 200 tonnes of liquid oxygen to India, thereby making healthcare a significant area of cooperation between the strategic partners. Under its “Vaccine Maitri” program, India provided 4.5 million doses of Covishield (AstraZeneca). Both countries are also looking forward to opening new horizons in the field of vaccine development, manufacture of pharmaceuticals, and support for building new hospitals in the Kingdom. Both countries are planning to develop cooperation in the field of alternative medicine. For this purpose, the two countries are considering signing MoUs to set up Yoga courses in the Kingdom.

With a strong presence of 2.6 million people from the Indian community, also being the largest expatriate community in Saudi Arabia, the Indian community’s contribution to the development aspect of Saudi Arabia has been acknowledged. Saudi authorities have time and again extended amnesty to Indian nationals and facilitated their travel documents to return to India.

India and Saudi Arabia: Towards A Bright Future

Based on the edifice and a strong foundation of historic and cultural ties built over the centuries, India and Saudi Arabia have been able to grow a stronger multifaceted relationship over the decades after their independence. The trajectory of growth of their bilateral ties suggests that India and Saudi Arabia have a promising and bright future together, given their pace of cooperation and engagement. While the Indian government is keen to seek Foreign Direct Investment to foster its economic growth and that it facilitates FDI by easing restrictions, India can serve as a bigger market for oil exports for Saudi Arabia as its economy grows, thereby creating more demand for oil. The future of bilateral trade between countries holds tremendous potential for mutual benefit. Thus, a strong strategic partnership and frequent engagement between the ministries and officials of India and Saudi Arabia will build strong mutual trust that will inevitably translate into economic growth.

New Delhi and Riyadh can scale their relationship to new heights and take their bilateral ties to next level by increasing not just economic cooperation, but also by encouraging strategic engagement in defence, energy, infrastructure, pharmaceutical, information technology, cyber security, and maritime security, in order to ensure mutual growth, regional security, peace, and stability. Saudi Arabia’s ambitious Vision 2030 and India’s ambitions for its economic growth, both countries hold the potential for providing a platform for each other’s growth.