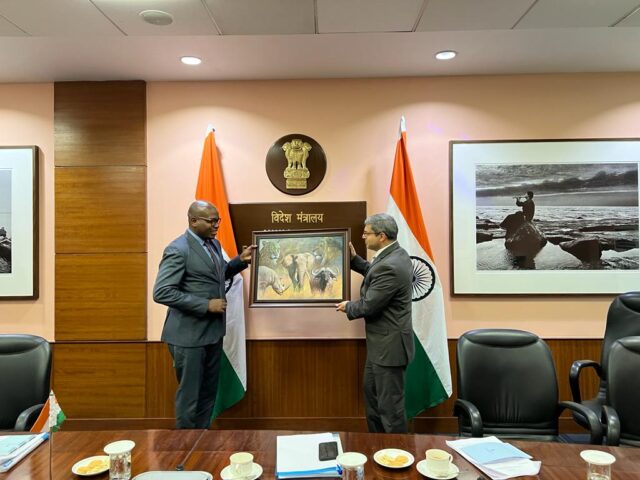 The second round of ‘Foreign Office Consultations’ between India and Tanzania was held on Thursday, 16th of June 2022, in New Delhi. India and Tanzania share traditionally close, friendly and cooperative bilateral relations. The discussions in the second edition of ‘Foreign Office Consultations,’ were led by the Joint Secretary (E&SA), Ministry of External Affairs Shri Puneet R Kundal from the Indian side and by Amb. Caesar C. Waitara, Director (Asia & Australasia), Ministry of Foreign Affairs and East African Cooperation of Tanzania on the Tanzanian side.

Owing to the exponential growth in bilateral trade, which touched US$ 4.5 billion for 2021-22, both sides expressed contentment. India stands as one of Tanzania’s biggest trading partners and among the top investors in Tanzania. The MEA Press Release stated that both sides agreed to further boost bilateral cooperation in various sectors and explore the possibilities of investment in health, education, port development and the agriculture sector.

India has extended 6 lines of Credit worth over US $ 1.1 billion to Tanzania, especially in the sector of city water supply and management as Tanzania is a major development partner of India. During the consultations, the Indian side recapitulated its commitment to continue the development partnership with Tanzania through grants and other such mechanisms.

Both, India as well as Tanzania agreed to continue high-level political exchanges and regular meetings of the joint institutional mechanisms to keep the partnership alive and beneficial for both.

Both sides have agreed to hold the next round of Foreign Office Consultations at a date which is mutually convenient, in Dar es Salaam, Tanzania. The Consultations were fruitful and were held in a friendly and cordial atmosphere.